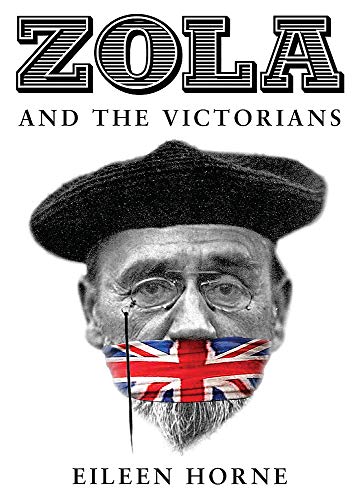 Zola and the Victorians
by Eileen Horne

Used Price
$9.19
Free Shipping in the US
The true story of the English publisher who dared to bring the works of Emile Zola to a Victorian audience, and paid a heavy price.
Reviews:
Trustpilot
Very Good

Zola and the Victorians Summary

Zola and the Victorians: Censorship in the Age of Hypocrisy by Eileen Horne

London, 1888: Jack the Ripper stalks the streets of Whitechapel; national strikes and social unrest threaten the status quo; a grave economic crisis is spreading across the Atlantic . . . Yet Her Majesty's government is preoccupied with "a mere book" - or rather, a series of books: new translations of the Rougon-Macquart saga by French literary giant Emile Zola.

In his time, Zola made his British contemporaries look positively pastoral; much of his work is considered shocking and transgressive even now. But it was his English publisher who bore the brunt of the Victorians' moral outrage at Zola's "realistic" depictions of striking miners, society courtesans and priapic, feuding farmers.

Seventy years before Lady Chatterley's Lover broke the back of British censorship, Henry Vizetelly's commitment to publishing Zola, and to the nascent principle of free speech, not only landed him in the dock and thereafter in prison, but brought to ruin to the publishing house he had founded. Meanwhile, Zola was going from strength to strength, establishing his reputation as a literary legend and falling in love with a woman half his age.

This lively, humorous and ultimately tragic tale is an exploration of the consequences of translation and censorship which remains relevant today for readers, publishers and authors everywhere.

Customer Reviews - Zola and the Victorians

Zola and the Victorians Reviews

Eileen Horne was born in California, and has lived in Italy and London for thirty-five years. She spent two decades as a television producer in the UK, founding her own production company in 1997 and making over a hundred hours of drama, among them two projects inspired by Zola's novels.She now combines writing, including adaptations for radio and television, with teaching and editing. Her first book, The Pitch, was published by Faber in 2006 and she translated an Italian novella for the MacLehose Press collection Judges (2014). She lives in London and Umbria with her husband and daughter.

GOR007099530
Zola and the Victorians: Censorship in the Age of Hypocrisy by Eileen Horne
Eileen Horne
Used - Very Good
Hardback
Quercus Publishing
2015-11-01
320
0857055186
9780857055187
N/A
Book picture is for illustrative purposes only, actual binding, cover or edition may vary.
This is a used book - there is no escaping the fact it has been read by someone else and it will show signs of wear and previous use. Overall we expect it to be in very good condition, but if you are not entirely satisfied please get in touch with us.