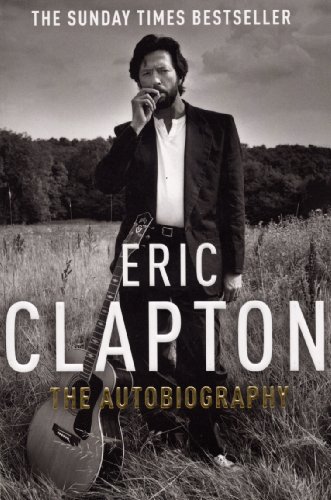 Used Price
$6.69
Free Shipping in the US
Eric Clapton is far more than a rock star. Now for the first time, Eric tells the story of his personal and professional journeys in this pungent, witty and painfully honest autobiography. Eric tells his story as it is, hiding nothing, with a directness and searing honesty that will make this book one of the most compelling memoirs of our time.
Reviews:
Trustpilot
Very Good Good

Eric Clapton is far more than a rock star. Like Dylan and McCartney, he is an icon and a living legend. He has sold tens of millions of records, played sell-out concerts all over the world and been central to the significant musical developments of his era. His guitar playing has seen him hailed as 'God'. Now for the first time, Eric tells the story of his personal and professional journeys in this pungent, witty and painfully honest autobiography. These are the memoirs of a survivor, someone who has reached the pinnacle of success, who has had it all, but whose demons have never left him. Eric tells his story as it is, hiding nothing, with a directness and searing honesty that will make this book one of the most compelling memoirs of our time.

"Eric Clapton has produced a gem of a rock memoir, in which he lays bare the painful roots of his music. Clapton speaks honestly and touchingly not only about the external course of his life but of what music has meant to him. That makes it much the best of this season's rock memoirs. Clapton delivers himself profoundly. It's extremely moving." * Evening Standard *
"Clapton relates what happened with painful honesty. In other rock stars, such plump contentment might seem hypocritical, even vulgar. But with Eric Clapton, you feel that a little comfort is the least he deserves." * Craig Brown, Mail on Sunday (4 star review) *
"This is an essential read" * Observer *
"It's a raw and remarkable piece of self-exposure" * Daily Telegraph *
"It is a pity more autobiograophers don't have Clapton's grounding in the blues." * Sunday Times *

Eric Clapton was born in 1945. At the age of eighteen, he joined the Yardbirds and in 1966, he formed Cream with Ginger Baker and Jack Bruce. Blind Faith and Derek and the Dominos followed before Eric embarked on his solo career which has spanned three decades to date. He has produced dozens of bestselling albums selling tens of millions of copies. He is married with three daughters and lives with his family in Surrey. He also has another daughter, Ruth, by a previous relationship.

GOR001188069
Eric Clapton: The Autobiography by Eric Clapton
Eric Clapton
Used - Very Good
Paperback
Cornerstone
2008-07-03
432
0099505495
9780099505495
N/A
Book picture is for illustrative purposes only, actual binding, cover or edition may vary.
This is a used book - there is no escaping the fact it has been read by someone else and it will show signs of wear and previous use. Overall we expect it to be in very good condition, but if you are not entirely satisfied please get in touch with us.