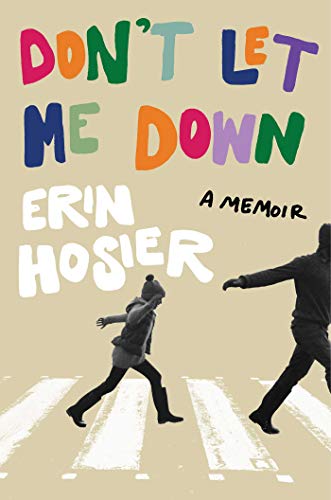 Don't Let Me Down
by Erin Hosier

Don't Let Me Down Summary

Don't Let Me Down: A Memoir by Erin Hosier

A fierce, vivid memoir about a father-daughter relationship steeped in God, rebellion, and the Beatles.

Erin Hosier's coming-of-age was full of contradiction. Born into the turbulent 1970s, she was raised in rural Ohio by lapsed hippies who traded 1960s rock 'n' roll for 1950s-era Christian hymns. Her mother's newfound faith was rooted in a desire to manage her husband's mood swings, which could alternately fill the house with music or with violence.

All the while, Jack was larger than life to his adoring daughter. Full of conflict, their complex relationship set the tone for three decades of Erin's relationships with men; the Beatles provided the soundtrack. Jack bonded with Erin over their iconic songs, even as they inspired her to question authority--both his and others'.

Don't Let Me Down is about a brave girl trying to navigate family secrets and tragedies and escape from small-town small-mindedness. It is a searing and often funny exploration of how women first see themselves through the lens of a parent's love, and of the ties that bind us to our childhood heroes, who ultimately lead us to ask that most profound of questions: Is love really all you need?

Customer Reviews - Don't Let Me Down

Don't Let Me Down Reviews

"Don't Let Me Down is a beautifully written, honest and often funny account of what it is to grow up as a woman. Erin Hosier not only nails the complicated father-daughter dynamic that inevitably cross-fades into gnarly relationships with men, but she does so artfully and with uncanny insight, delivering a stunningly tender tribute to the power of faith, love and, yes, the Beatles."-- Nancy Balbirer, author of A Marriage in Dog Years
"Erin's humorous, insightful memoir is wildly quotable. Like Ben Franklin quotable. You'll be passing off her profound little bon-mots to your friends like you wrote them."-- Mishna Wolff, author of I'm Down
"In Erin Hosier's Don't Let Me Down, she shows us the slow and often imperceptible ways that a family becomes fractured, one secret at a time, until all is broken. Her memoir attempts to make that brokenness whole, an homage to her father, a testament to her brothers, to faith, and ultimately, to love. All of this is set within the structure of old Beatles tunes, one of the few shared pleasures that her family engaged in together. I read it in one sitting, the words playing like an LP in my brain."-- Tanya Marquardt, author of Stray: Memoir of a Runaway
"[An] unsettling yet witty coming-of-age story...with chapter headings named after Beatles songs, this incisive memoir effectively transports readers to the '70s while exploring the weighty complexities of father-daughter love."-- Publishers Weekly
"Erin Hosier's remarkable coming-of-age story is tender, funny and resilient. Hosier doesn't shy away from the complications and contradictions of love, sharing both the best and the worst of her volatile, vibrant father and detailing--in her singular and often hilarious voice the difficulty of leaving childhood, home, and the people who loved you first."-- Cynthia D'Aprix Sweeney, New York Times bestselling author of The Nest
"Clap your hands, rattle your jewelry, and twist and shout for Erin Hosier's Don't Let Me Down. If 'true love shares a soundtrack, ' The Beatles gave an inspired daughter her only chance to connect with a complicated, troubled father. Hosier's story is crammed with joy, heartbreak, transformation, and, at last, acceptance. Fierce, catchy, hilarious - like your favorite ?vinyl punk '45 - this bird can sing. A glorious memoir."-- Brando Skyhorse, author of Take This Man
"With a soundtrack provided by the Beatles, [Erin] Hosier's memoir considers her Ohio youth and New York City coming-of-age... Hosier writes most ecstatically about music and keeps readers turning pages with suspenseful foreshadowing and subtle cliff-hangers."-- Booklist
"Hosier delivers a memoir that is less about chasing an identity and more about having one cast upon her and coming to terms with it. A vividly rhythmic chronicle of reconciliation couched with a 1960s rock-'n'-roll soundtrack."-- Kirkus Reviews

Erin Hosier is the coauthor of Patty Schemel's Hit So Hard and is a literary agent with Dunow, Carlson, & Lerner. She lives in Brooklyn.

CIN000116830
Don't Let Me Down: A Memoir by Erin Hosier
Erin Hosier
Used - Very Good
Hardback
Simon & Schuster
2019-03-01
336
1451644957
9781451644951
N/A
Book picture is for illustrative purposes only, actual binding, cover or edition may vary.
This is a used book - there is no escaping the fact it has been read by someone else and it will show signs of wear and previous use. Overall we expect it to be in very good condition, but if you are not entirely satisfied please get in touch with us.