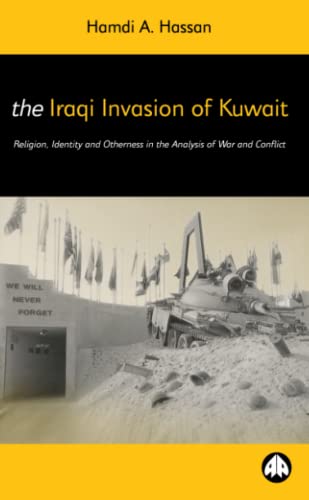 The Iraqi Invasion of Kuwait
by Hamdi A. Hassan

Used Price
$24.99
Free Shipping in the US
To what extent has religion, identity and 'otherness' facilitated and accelerated armed conflict in the Middle East?
Reviews:
Trustpilot
Very Good

The Iraqi Invasion of Kuwait Summary

The Iraqi Invasion of Kuwait: Religion, Identity and Otherness in the Analysis of War and Conflict by Hamdi A. Hassan

Focusing on the 1990 Iraqi invasion of Kuwait, Hamdi Hassan offers a balanced examination of the motivation of the Iraqi polity and the conditions which accelerated and facilitated the decision to invade.

Critical of the traditional approach of most Middle East studies, The Iraqi Invasion of Kuwait offers a counterpoint to Western interpretations of this key event in the contemporary history of the Middle East.

Hassan examines how Saddam Hussein assessed and responded to American and Israeli intentions after the invasion, the reaction of other Arab states, and the unprecedented grassroots support for the Iraqi leadership. In this context, the author examines the social structure of Iraqi society - families, clans and regional alliances - and the importance of Ba'athism. Hassan also examines the political structure of the country, relating the identity of Arabism - the religion and language which is associated closely with the Pan Arabist ideals - to Iraqi foreign policy.

The Iraqi Invasion of Kuwait Reviews

'If you're not satisfied with the mainstream western press's explanation of Saddam Hussein's behaviour or why he's still in power, then read this book ... A powerful antidote to the uninformed, prejuding drivel that is the standard western media fare' -- Spectre
'Compelling ... Hassan has produced a thought-provoking work that speaks equally well to area specialists and international relations theorists' -- Millennium
'His careful examination of the Iraqui invasion of Kuwait from the perspective of Arabism is therefore an especially useful contribution to the literature of the invasion.' -- Middle Eastern Studies

About Hamdi A. Hassan

Hamdi Hassan is a consultant to the Swedish National Labour Market Administration, working on cases of employment and the integration of immigrants. He has been associated with Al-Ahram Centre for Political and Strategic Studies and the University of Stockholm, where he taught political theory.

GOR003552137
The Iraqi Invasion of Kuwait: Religion, Identity and Otherness in the Analysis of War and Conflict by Hamdi A. Hassan
Hamdi A. Hassan
Used - Very Good
Paperback
Pluto Press
1998-12-25
288
0745314112
9780745314112
N/A
Book picture is for illustrative purposes only, actual binding, cover or edition may vary.
This is a used book - there is no escaping the fact it has been read by someone else and it will show signs of wear and previous use. Overall we expect it to be in very good condition, but if you are not entirely satisfied please get in touch with us.