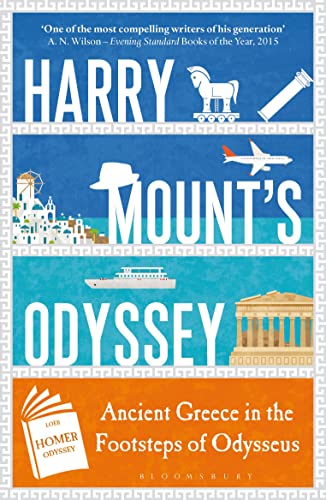 Harry Mount's Odyssey: Ancient Greece in the Footsteps of Odysseus by Harry Mount

Architecture, art, sculpture, economics, mathematics, science, metaphysics, comedy, tragedy, drama and epic poetry were all devised and perfected by the Greeks. Of the four classical orders of architecture, three were invented by the Greeks and the fourth, the only one the Romans could come up with, was a combination of two of the former.The powerful ghost of ancient Greece still lingers on in the popular mind as the first great civilization and one of the most influential in the creation of modern thought. It is the starting block of Western European civilization. In his new Odyssey, eminent writer Harry Mount tells the story of ancient Greece while on the trail of its greatest son, Odysseus. In the charming, anecdotal style of his bestselling Amo, Amas, Amat and All That, Harry visits Troy, still looming over the plain where Achilles dragged Hector's body through the dust, and attempts to swim the Hellespont, in emulation of Lord Byron and the doomed Greek lover, Leander. Whether in Odysseus's kingdom on Ithaca, Homer's birthplace of Chios or the Minotaur's lair on Crete, Mount brings the Odyssey - and ancient Greece - back to life.

The book is packed with such goodies ... As he picks his way among the ruins, brooding on the past - his own, and that of Greece - the author remains essentially English ... Equally, at times, Harry Mount has an air of being the living embodiment of the study of classics itself: noble, solitary, uneasily beleaguered, and sporting a slightly silly hat * Spectator *
Mount is honey-tongued, and this journey is ... fantastically entertaining * The Times *
An exploration of the diverse ways in which ancient Greek culture still runs in our veins, influences our thinking and governs our world view. -- Michael C. Scott * Times Literary Supplement *
[An] enjoyable and informative book ... fact and fiction can, as in the Bible, merge to create a heady mixture, which inspires and instructs. Cruise this book, and find the flavour of it * The Oldie *
One of the most compelling writers of his generation. -- A.N.Wilson * Evening Standard - Books of the Year 2015 *
A minor masterpiece of self-deprecation -- Nicholas Lezard * Guardian *

Harry Mount studied ancient and modern history and classics at Magdalen College, Oxford, where he gained a First. He has written a number of books including Amo, Amas, Amat and All That (Short Books), A Lust for Windowsills (Little Brown) and How England Made the English (Viking). He is a former New York correspondent for The Daily Telegraph and now writes regularly for the Spectator, The Daily Telegraph and The Daily Mail.

GOR007741025
Harry Mount's Odyssey: Ancient Greece in the Footsteps of Odysseus by Harry Mount
Harry Mount
Used - Very Good
Paperback
Bloomsbury Publishing PLC
2016-06-02
288
1472935969
9781472935960
N/A
Book picture is for illustrative purposes only, actual binding, cover or edition may vary.
This is a used book - there is no escaping the fact it has been read by someone else and it will show signs of wear and previous use. Overall we expect it to be in very good condition, but if you are not entirely satisfied please get in touch with us.