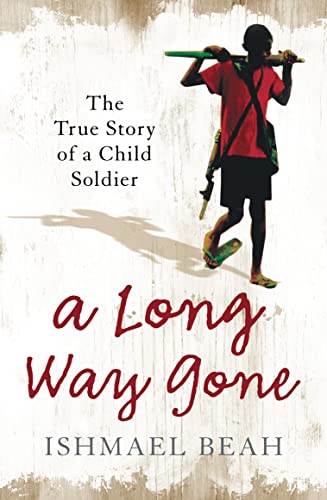 The first-person account of a 26-year-old who fought in the war in Sierra Leone as a 12-year-old boy.

A Long Way Gone: The True Story of a Child Soldier by Ishmael Beah

The first-person account of a 26-year-old who fought in the war in Sierra Leone as a 12-year-old boy.

`My new friends have begun to suspect that I haven't told them the full story of my life.
"Why did you leave Sierra Leone?"
"Because there is a war."
"You mean, you saw people running around with guns and shooting each other?"
"Yes, all the time."
"Cool."
I smile a little.
"You should tell us about it sometime."
"Yes, sometime."'

This is how wars are fought now: by children, hopped-up on drugs and wielding AK-47s. There are more than fifty conflicts going on worldwide and it is estimated there are some 300,000 child soldiers fighting. Ishmael Beah used to be one of them.

What is war like through the eyes of a child soldier? How does one become a killer? How does one stop? Child soldiers have been profiled by journalists, and novelists have struggled to imagine their lives. But until now, there has not been a first-person account from someone who came through this hell and survived. Ishmael Beah, now twenty-five years old, tells a riveting story: how at the age of twelve in Sierra Leone, he fled attacking rebels and wandered a land rendered unrecognizable by violence. By thirteen, he'd been picked up by the government army, and Beah, at heart a gentle boy, found he was capable of truly terrible acts.

This is a rare and mesmerizing account, told with real literary force and heartbreaking honesty.

'A corrosive, eloquent and illuminating account of a child soldier's life, and it makes you look at the news with a fresh eye. What he has done is to make his situation imaginable for us, and stop us from simply turning away in horror. That is the best gift he could give the world.' Hilary Mantel

`Gives the war a painfully human dimension and reminds us of its pointlessness...If the pathos of this book helps to persuade the puppeteers of the estimated 300,000 child soldiers fighting today to put down their guns, then Beah will have done more than all those A47s ever have.' The Times

`A lucid, pensive, beautifully written account of a madness that he has the bravery to revisit head-on.' TLS

`Few of those boy soldiers have told their story as eloquently as Ishmael Beah.' Sunday Telegraph

'The arming of children is one of the greatest evils of the modern world, and yet we know so little about it because the children themselves are swallowed up by the very wars they are forced to wage. Ishmael Beah has not only emerged intact from this chaos, he has become one of its most eloquent chroniclers. "A Long Way Gone" is one of the most important war stories of our generation. We ignore its message at our peril.' Sebastian Junger

'A ferocious and desolate account of how ordinary children were turned into professional killers.' The Guardian

'Beah makes no excuses for his actions and is entirely lacking in self pity, but the honesty of his memoir reveals the full horror of a war in which the brutalisation of children was commonplace...Beah is a living testament to the endurance of the human spirit.' Sunday Times

`Ishmael Beah has achieved the seemingly impossible task of helping us to imagine the reality behind the statistics by empathising with just one of the many thousands of children who are soldiers around the world - a remarkable book.' The Guardian

Ishmael Beah came to the United States when he was seventeen and graduated from Oberlin College in 2004. He is a member of the Human Rights Watch Children's Rights Division Advisory Committee and has spoken before the United Nations on several occasions. He lives in New York City.

GOR001248495
A Long Way Gone: The True Story of a Child Soldier by Ishmael Beah
Ishmael Beah
Used - Very Good
Paperback
HarperCollins Publishers
2008-01-01
400
0007247095
9780007247097
N/A
Book picture is for illustrative purposes only, actual binding, cover or edition may vary.
This is a used book - there is no escaping the fact it has been read by someone else and it will show signs of wear and previous use. Overall we expect it to be in very good condition, but if you are not entirely satisfied please get in touch with us.