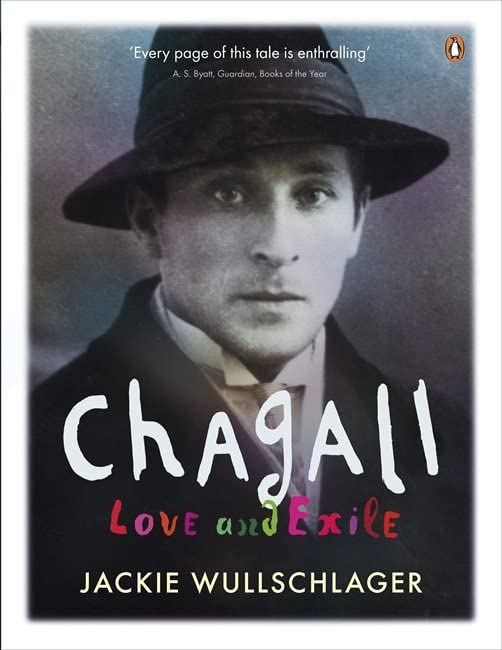 Used Price
$23.99
Free Shipping in the US
Born as the son of a Russian Jewish herring merchant, Chagall fled the repressive 'potato-colored' czarist empire in 1911 to develop his genius in Paris, living alongside Modigliani and Leger in La Ruche, the artist's colony where 'you either died or came out famous'. This title presents the account of Chagall the man and the artist.
Reviews:
Trustpilot
Very Good

'When Matisse dies, Chagall will be the only painter left who understands what colour really is.' Picasso said this in the 1950s, when he and Chagall were eminent neighbours living in splendour on the Cote d'Azur. But behind Chagall's role as a pioneer of modern art lay struggle, heartbreak, bitterness, lost love, exile, and the miracle of survival. Born the son of a Russian Jewish herring merchant, Chagall fled the repressive "potato-coloured" czarist empire in 1911 to develop his genius in Paris, living alongside Modigliani and Leger in La Ruche, the artist's colony where "you either died or came out famous". Through war and revolution in Bolshevik Russia, Weimar Berlin, occupied France and 1940s New York, he gave form to his dreams, longings and memories in paintings which are among the most humane and joyful of the 20th century. Drawing on numerous interviews with the artist's family, friends, dealers, collectors, and illustrated with two hundred paintings, drawings and photographs, many previously unseen, this elegantly written biography gives for the first time a full and true account of Chagall the man and the artist - and of a life as intense, theatrical and haunting as his paintings.

Jackie Wullschlager's wonderful biography moves with sure speed and precise drama -- A.S. Byatt * Financial Times *
This is a masterly biography. Jackie Wullschlager has a painter's eye, a historian's grasp of context and a novelist's pace and momentum. She gives back to Chagall's paintings the sharpness and strangeness that they had for his contemporaries ... so gripping that I couldn't put the book down -- Hilary Spurling

Jackie Wullschlager is Chief Art Critic of the Financial Times, where she has worked since 1986. Her books include the prize-winning Hans Christian Andersen: The Life of a Storyteller, and an acclaimed group biography of Victorian children's writers, Inventing Wonderland. She lives in London with her husband and three children.

GOR006246270
Chagall: Love and Exile by Jackie Wullschlager
Jackie Wullschlager
Used - Very Good
Paperback
Penguin Books Ltd
2010-04-01
642
0141009888
9780141009889
Winner of Spear's Book Awards: Biography of the Year 2009 Short-listed for Costa Biography Award 2008
Book picture is for illustrative purposes only, actual binding, cover or edition may vary.
This is a used book - there is no escaping the fact it has been read by someone else and it will show signs of wear and previous use. Overall we expect it to be in very good condition, but if you are not entirely satisfied please get in touch with us.