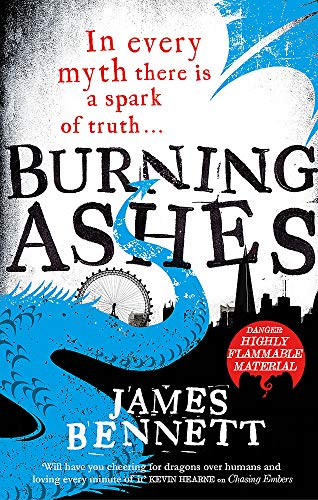 The Lore is over. For Ben Garston, the fight is just beginning.

The uneasy truce between the human and the mythical world has shattered. Betrayed by his oldest friend, with a tragic death on his hands, there isn't enough whiskey in England to wash away the taste of Ben's guilt. But for a one-time guardian dragon, there's no time to sit and sulk in the ruins.

Because the Long Sleep has come undone. Slowly but surely, Remnants are stirring under the earth, unleashing chaos and terror on an unsuspecting modern world. Worse still, the Fay are returning, travelling across the gulfs of the nether to bring a final reckoning to Remnants and humans alike.

A war is coming. A war to end all wars. And only Ben Garston stands in the way . . .

Fans of BEN AARONOVITCH and JIM BUTCHER will revel in this fiery tale of magic, mayhem and modern-day mythology.

Praise for the Ben Garston novels:

'Blending together the best of action, adventure and urban fantasy . . . Chasing Embers is one of my highlights!' The Eloquent Page

In this magnificent tale melding the mythic and the modern, an age-old pact has been broken and legendary creatures, called remnants, are stomping through our own world, tearing up London like it's a toy town * DAILY MAIL *

James Bennett is a British writer raised in Sussex and South Africa. His travels have furnished him with an abiding love of different cultures, history and mythology. His short fiction has appeared internationally and the acclaimed Chasing Embers was his debut fantasy novel. James lives in London and sees dragon bones in the Thames whenever he crosses a bridge.

GOR010718289
Burning Ashes: A Ben Garston Novel by James Bennett
James Bennett
Used - Like New
Paperback
Little, Brown Book Group
2018-12-11
416
0356506673
9780356506678
N/A
Book picture is for illustrative purposes only, actual binding, cover or edition may vary.
The book has been read, but looks new. The book cover has no visible wear, and the dust jacket is included if applicable. No missing or damaged pages, no tears, possible very minimal creasing, no underlining or highlighting of text, and no writing in the margins.