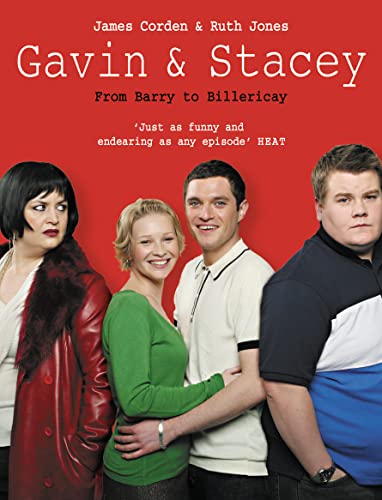 Gavin and Stacey
by James Corden

Gavin & Stacey (plus friends) take you on a tour of their home towns, showing you the world of their hit BBC comedy series as you've never seen it before.

Gavin and Stacey: From Barry to Billericay by James Corden

Gavin & Stacey (plus friends) take you on a tour of their home towns, showing you the world of their hit BBC comedy series as you've never seen it before.

`Oh, the guilt. She (Nessa) stuck things in...oh...look can you ask Stacey coz' if it's a Welsh thing I don't have to see a doctor.' Smithy

If only it was just the two of them.

Gavin is an ordinary boy from Essex. Stacey is an ordinary girl from South Wales. The result is a double BAFTA award winning hit BBC comedy that has become the biggest show since Phoenix Nights and Little Britain.

For for the first time, Gavin & Stacey and friends take us on their journey from Barry to Billericay.

Fully illustrated with stills and photographs from the show, Gavin and Stacey: From Barry to Billericay will feature brand new material written by the stars and co-writers of the series Ruth Jones and James Corden.

"It seems like every TV programme on the box is releasing a cash-in - sorry, we mean tie-in - book. But while the majority are cheaply put together, badly written and - frankly - dull, Gavin and Stacey: From Barry to Billericay is the work of James Corden and Ruth Jones and is just as funny and endearing as any episode...So, if you do find this in your stocking come Christmas morning, there's plenty to keep you entertained far beyond Boxing Day." Heat

"The crew take you on a tour of their homes with diaries, Facebook pages, Smithy's "Cruise, marry or shag" quiz, Bryn's Top 10 Things To Do Before You Die ("send an email") and top nights out in Billericay.***** " Zoo

GOR001932191
Gavin and Stacey: From Barry to Billericay by James Corden
James Corden
Used - Very Good
Paperback
HarperCollins Publishers
2009-10-01
224
0007343337
9780007343331
N/A
Book picture is for illustrative purposes only, actual binding, cover or edition may vary.
This is a used book - there is no escaping the fact it has been read by someone else and it will show signs of wear and previous use. Overall we expect it to be in very good condition, but if you are not entirely satisfied please get in touch with us.