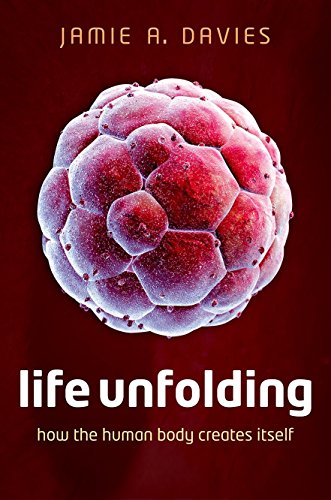 Life Unfolding
by Jamie A. Davies (Professor of Experimental Anatomy, University of Edinburgh)

Used Price
$18.99
Free Shipping in the US
How can something as complex as a human body create itself from a single fertilized egg? Drawing on ideas from physics and network theory as well as genetics and embryology, Jamie Davies describes the fascinating picture emerging from the latest research, in which complexity builds up through 'adaptive self-organization'.
Reviews:
Trustpilot
Very Good Good

Life Unfolding: How the human body creates itself by Jamie A. Davies (Professor of Experimental Anatomy, University of Edinburgh)

Where did I come from? Why do I have two arms but just one head? How is my left leg the same size as my right one? Why are the fingerprints of identical twins not identical? How did my brain learn to learn? Why must I die? Questions like these remain biology's deepest and most ancient challenges. They force us to confront a fundamental biological problem: how can something as large and complex as a human body organize itself from the simplicity of a fertilized egg? A convergence of ideas from embryology, genetics, physics, networks, and control theory has begun to provide real answers. Based on the central principle of 'adaptive self-organization', it explains how the interactions of many cells, and of the tiny molecular machines that run them, can organize tissue structures vastly larger than themselves, correcting errors as they go along and creating new layers of complexity where there were none before. Life Unfolding tells the story of human development from egg to adult, from this perspective, showing how our whole understanding of how we come to be has been transformed in recent years. Highlighting how embryological knowledge is being used to understand why bodies age and fail, Jamie A. Davies explores the profound and fascinating impacts of our newfound knowledge.

an astonishingly lucid and captivating account of the strange construction processes that lead from a single cell to a fully formed body * TLS, Asif A. Ghazanfar *
A demanding but wonder-filled account of the simple interactions that create complex structures. * New Scientist *

About Jamie A. Davies (Professor of Experimental Anatomy, University of Edinburgh)

Since 1995, Jamie A. Davies has run his own laboratory at the University of Edinburgh, with a multi-disciplinary focus on discovering how mammalian organs construct themselves and how we can use this knowledge to build new tissues and organs for those in need. He has published over 100 research papers in the field of mammalian development, published a major specialist monograph (Mechanisms of Morphogenesis, Academic Press, 2005,2013), and edited three multi-author books in the fields of development, stem cells, and tissue engineering. He is a Fellow of the Society of Biology, a Fellow of the Royal Society of Medicine, and a Fellow of the Higher Education Academy. He served as Editor-in-Chief of the journal, Organogenesis, from the foundation of the journal in 2004 until 2012.