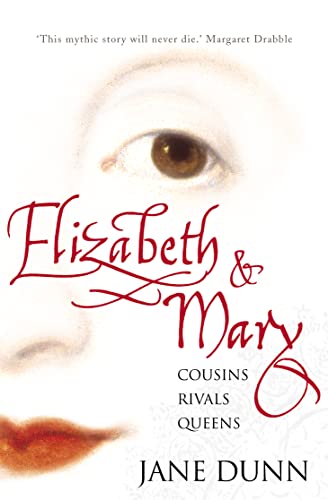 Elizabeth and Mary
by Jane Dunn

This is the first biography of the fateful relationship between Elizabeth I and Mary Queen of Scots. It was the defining relationship of their lives, and marked the intersection of the great Tudor and Stuart dynasties, a landmark event in British history.

This is the first biography of the fateful relationship between Elizabeth I and Mary Queen of Scots. It was the defining relationship of their lives, and marked the intersection of the great Tudor and Stuart dynasties, a landmark event in British history.

Distinguished biographer Jane Dunn reveals an extraordinary story of two queens ruling in one isle, both embodying opposing qualities of character, ideals of womanliness and of divinely ordained kingship. Theirs is a drama of sex and power, recklessness, ambition and political intrigue, with a rivalry that could only be resolved by death.

As regent queens in an overwhelmingly masculine world, they were deplored for their femininity, compared unfavourably with each other, and courted by the same men. By placing this dynamic and ever-changing relationship at the centre of the book, Dunn throws new light and meaning on the complexity of their natures. She reveals an Elizabeth revolutionary in her insistence on ruling alone, while Mary is not the romantic victim of history, but a courageous adventurer with a reckless heart. Vengeful against her enemies and the more ruthless of the two, she was untroubled by plotting Elizabeth's murder. Elizabeth, however, was in anguish at having to sanction Mary's death warrant for treason.

Working almost exclusively from contemporary letters and writings, she lets them speak to us across more than four hundred years, their voices and responses surprisingly familiar to our own, their characters vivid, by turns touching and terrible.

`She writes with vigour and grace. This is an engaging and thoughtful new rendering of a story worth retelling.' Spectator

`Jane Dunn has written a splendid piece of popular history with the ready-pen of a highly skilled writer, endowed with remarkable insight.' Roy Strong, Daily Mail

`Jane Dunn is one of our best biographers.' Miranda Seymour, Sunday Times

`Jane Dunn has that sine qua non of the true biographer, an eye for significant detail and the power to fit it into a larger pattern.' Richard Holmes, The Times

Jane Dunn is the biographer of the relationship between Virginia Woolf and Vanessa Bell, Mary Shelley, and most recently a groundbreaking biography of Antonia White. She is Fellow of the Royal Society of Literature and lives in Bath.

GOR001240286
Elizabeth and Mary: Cousins, Rivals, Queens by Jane Dunn
Jane Dunn
Used - Very Good
Paperback
HarperCollins Publishers
2004-03-01
592
000653192X
9780006531920
N/A
Book picture is for illustrative purposes only, actual binding, cover or edition may vary.
This is a used book - there is no escaping the fact it has been read by someone else and it will show signs of wear and previous use. Overall we expect it to be in very good condition, but if you are not entirely satisfied please get in touch with us.