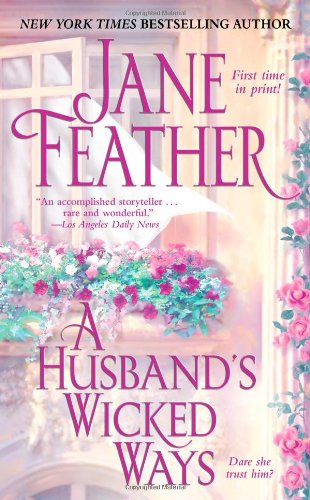 Used Price
$7.99
Free Shipping in the US
Bestselling author Feather delivers the sizzling conclusion to her Cavendish Square trilogy with this sparkling story of the alluring secrets hidden behind the elegance of Regency London. Original.
Very Good Good

When a spymaster proposes marriage as a cover, it might be madness for a lady to indulge in...

Bestselling author Jane Feather beguiles with this sparkling story of the alluring secrets hidden behind the elegance of Regency London, when a lovely young woman discovers the danger...and delight...of risking everything for love.

Aurelia Farnham believes she is happy living in London's stylish Cavendish Square. But with her friends Livia and Cornelia both married now, Aurelia is the only one still husbandless, and sometimes she longs for more. Then Colonel Sir Greville Falconer storms into her life, delivering a letter from her late husband, a war hero, which reveals he was a spy -- the colonel's spy. Now Greville needs Aurelia to continue the patriotic mission and partner him as he exposes a ring of Spanish spies who have infiltrated London society.

The attentions of the charismatic Greville excite Aurelia as his mock courtship blurs the line between pretense and reality. When the simmering attraction between them ignites into passion and the danger of Aurelia's double life escalates, Greville insists on marriage as the best way to protect her. Now Aurelia realizes she has more than shadowy antagonists to fear, for she's lost her heart to a dashing spymaster who will one day slip away as suddenly as he appeared....

Jane Feather is the New York Times bestselling author of more than thirty sensual historical romances, including the Blackwater Bride series. She was born in Cairo, Egypt, and grew up in the south of England. She currently lives in Washington, DC, with her family. There are more than 10 million copies of her books in print.