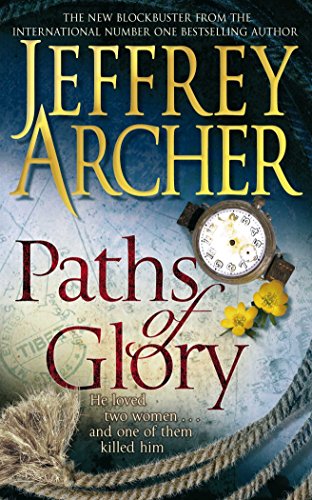 Paths of Glory
by Jeffrey Archer

In Stock
$6.69
The Sunday Times Number One Bestseller inspired by the heroic real-life tale of George Mallory.
Very Good Good
32 in stock

Paths of Glory by Jeffrey Archer

Inspired by a true story, Paths of Glory bring to life one of history's enduringly enigmatic figures in a stunning novel from bestselling author Jeffrey Archer.

Some people have dreams that are so outrageous that if they were to achieve them, their place in history would be guaranteed. Francis Drake, Robert Scott, Percy Fawcett, Charles Lindbergh, Amy Johnson, Edmund Hillary and Neil Armstrong are among such individuals. But what if one man had such a dream, and when he'd fulfilled it, there was no proof that he had achieved his ambition?

Paths of Glory is the story of such a man. But not until you've turned the last page of Jeffrey Archer's extraordinary novel, will you be able to decide if mountaineer George Mallory should be added to this list of legends, because if he were, another name would have to be removed.

Archer at the peak of his imaginative powers * The Times *
Paths of Glory will lead Archer to fans he has never before conquered * Independent *
The plain storytelling is unimprovable. Few literary writers could do his job better * Sunday Times *

GOR001244225
Paths of Glory by Jeffrey Archer
Jeffrey Archer
Used - Very Good
Paperback
Pan Macmillan
2009-04-18
416
0330511661
9780330511667
N/A
Book picture is for illustrative purposes only, actual binding, cover or edition may vary.
This is a used book - there is no escaping the fact it has been read by someone else and it will show signs of wear and previous use. Overall we expect it to be in very good condition, but if you are not entirely satisfied please get in touch with us.