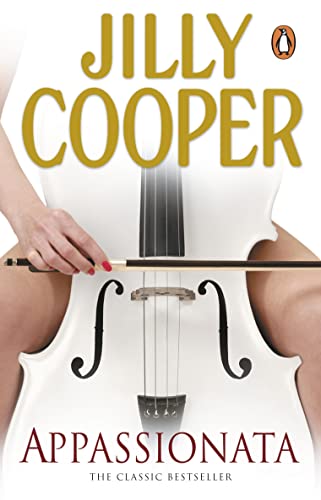 Given the chance to take over the Rutminster Symphony Orchestra, Abby is ecstatic, not realising the RSO is in hock up to its neck and is composed of the wildest bunch of musicians ever to blow a horn or caress a fiddle.

Abigail Rosen, nicknamed Appassionata, was the sexiest, most flamboyant violinist in classical music, but she was also the loneliest and the most exploited girl in the world. When a dramatic suicide attempt destroyed her violin career, she set her sights on the male-dominated heights of the conductor's rostrum.

Given the chance to take over the Rutminster Symphony Orchestra, Abby is ecstatic, not realising the RSO is in hock up to its neck and is composed of the wildest bunch of musicians ever to blow a horn or caress a fiddle. Abby finds it increasingly difficult to control her undisciplined rabble and pretend she is not madly attracted to the fatally glamorous horn player, Viking O'Neill, who claims droit de seigneur over every pretty woman joining the orchestra. And then Rannaldini, arch-fiend and international maestro, rolls up with Machiavellian plans of his own to sabotage the RSO.

Effervescent as champagne, Jilly Cooper's novel brings back old favourites like Rupert and Taggie Campbell-Black, but also ends triumphantly with a rampageous orchestral tour of Spain and the high drama of an international piano competition.

Appassionata - the divine Jilly Cooper's latest and greatest novel * The Sunday Times *
Triumphant... a boisterous tale of sex and Chopin amongst Rutshire folk * Tatler *
Sexy, dazzling protagonists... the humour comes thick and fast * Daily Express *
Delicious: light as a souffle and with divine flashes of wit. I could not put the damned thing down * Sunday Express *

Jilly Cooper is a journalist, author and media superstar. The author of many number one bestselling novels, she lives in Gloucestershire with her rescue racing greyhound, Bluebell.

She has been awarded honorary doctorates by the Universities of Gloucestershire and Anglia Ruskin, and won the inaugural Comedy Women in Print lifetime achievement award in 2019. She was appointed CBE in 2018 for services to literature and charity.

GOR001234545
Appassionata by Jilly Cooper
Jilly Cooper
Used - Very Good
Paperback
Transworld Publishers Ltd
2007-05-07
896
0552156388
9780552156387
N/A
Book picture is for illustrative purposes only, actual binding, cover or edition may vary.
This is a used book - there is no escaping the fact it has been read by someone else and it will show signs of wear and previous use. Overall we expect it to be in very good condition, but if you are not entirely satisfied please get in touch with us.