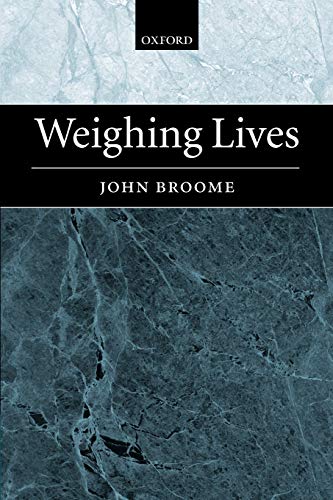 Used Price
$38.99
Free Shipping in the US
How should we weigh lives? This book develops a theoretical basis for answering this practical question. Using some of the precise methods of economic theory (accessible without mathematical expertise), its conclusions are significant for political theorists and economists, as well as for philosophers, and anyone concerned with the value of life.
Reviews:
Trustpilot
Good

We are often faced with choices that involve the weighing of people's lives against each other, or the weighing of lives against other good things. These are choices both for individuals and for societies. A person who is terminally ill may have to choose between palliative care and more aggressive treatment, which will give her a longer life but at some cost in suffering. We have to choose between the convenience to ourselves of road and air travel, and the lives of the future people who will be killed by the global warming we cause, through violent weather, tropical disease, and heat waves. We also make choices that affect how many lives there will be in the future: as individuals we choose how many children to have, and societies choose tax policies that influence people's choices about having children. These are all problems of weighing lives. How should we weigh lives? Weighing Lives develops a theoretical basis for answering this practical question. It extends the work and methods of Broome's earlier book Weighing Goods to cover the questions of life and death. Difficult problems come up in the process. In particular, Weighing Lives tackles the well-recognized, awkward problems of the ethics of population. It carefully examines the common intuition that adding people to the population is ethically neutral - neither a good nor a bad thing - but eventually concludes this intuition cannot be fitted into a coherent theory of value. In the course of its argument, Weighing Lives examines many of the issues of contemporary moral theory: the nature of consequentialism and teleology; the transitivity, continuity, and vagueness of betterness; the quantitative conception of wellbeing; the notion of a life worth living; the badness of death; and others. This is a work of philosophy, but one of its distinctive features is that it adopts some of the precise methods of economic theory (without introducing complex mathematics). Not only philosophers, but also economists and political theorists concerned with the practical question of valuing life, should find the book's conclusions highly significant to their work.

Numerous publications grapple with the value of life, but Weighing Lives is more important and more substantial than most. In an area in which many authors content themselves with a gallimaufry of peculiar moral intuitions, Broome digs deep and argues with rigour. * TLS *
Review from previous edition Weighing Lives is an exemplary piece of moral philosophy, written at an awesome level of clarity and rigour ... there is scarcely an extraneous word ... brilliant and provocative * Daniel Hausman, Mind *
an engrossing book which is a model of clarity, elegance, and rigour. Written, as good philosophy should be, as a contribution to a joint enterprise, it sets out a bold position in a way that invites further discussion and provides a platform for the development of diverging views. It should serve as the reference-point for future theorizing about population ethics in particular, and the aggregation of well-being more generally. * Garrett Cullity, Notre Dame Philosophical Reviews *