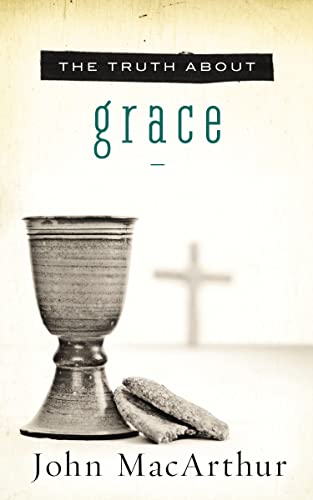 The Truth About Grace
by John F. MacArthur

Used Price
$9.39
Free Shipping in the US
Best-selling author and pastor John MacArthur illuminates this profound concept with verse upon verse of Scripture. He also shows that misunderstandings about grace have led to some of the church's greatest problems, perhaps because grace is her most precious gift.
Reviews:
Trustpilot
Very Good

The Truth About Grace Summary

The Truth About Grace by John F. MacArthur

"Is the experience of God's grace in your life a thrilling thing? Just thinking about the fact that God, by His own sovereign plan, decided to be gracious to me is overwhelming. There is nothing greater than receiving grace upon grace." -John MacArthur

Simple definitions can make grace feel like an obvious?even mundane?concept. Nothing could be further from the truth. Grace is the defining feature of the Christian faith. Once we understand how undeserving we are and how much favor we've been given, grace becomes shocking, thrilling, inspiring, and contagious.

Best-selling author and pastor John MacArthur illuminates this profound concept with verse upon verse of Scripture. He also shows that misunderstandings about grace have led to some of the church's greatest problems, perhaps because grace is her most precious gift.

The Truth About Series

For decades, MacArthur has encouraged countless Christians to develop a deeper understanding of the Bible and a greater respect for God's truth. In The Truth About series, he now gathers his landmark teachings about core aspects of the Christian faith in one place. These powerful books are designed to give readers a focused experience that centers on God's character and how it applies to their daily walk of faith.

Customer Reviews - The Truth About Grace

John MacArthur has served as pastor-teacher of Grace Community Church in Sun Valley, California, since 1969. His ministry of expository preaching is unparalleled in its breadth and influence. In more than five decades of ministry from the same pulpit, he has preached verse by verse through the entire New Testament and several key sections of the Old Testament. He is Chancellor of the Master's University and Seminary, and can be heard daily on the Grace to You radio broadcast (carried on hundreds of radio stations worldwide). He has authored numerous bestselling books, including Twelve Ordinary Men and One Perfect Life. For more details about John MacArthur and his Bible-teaching resources, contact Grace to You at 800-55-GRACE or gty.org.

GOR007180441
The Truth About Grace by John F. MacArthur
John F. MacArthur
Used - Very Good
Paperback
Thomas Nelson Publishers
2012-05-01
128
1400204127
9781400204120
N/A
Book picture is for illustrative purposes only, actual binding, cover or edition may vary.
This is a used book - there is no escaping the fact it has been read by someone else and it will show signs of wear and previous use. Overall we expect it to be in very good condition, but if you are not entirely satisfied please get in touch with us.