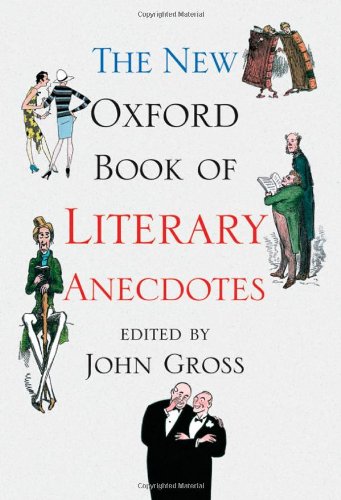 The New Oxford Book of Literary Anecdotes
by John Gross

Used Price
$11.69
Free Shipping in the US
Presents a collection of literary gossip and sidelights on the lives of the authors. This anthology finds room for Chaucer, Milton and Margaret Atwood, George Eliot and P G Wodehouse, Chinua Achebe and Ian Fleming, Brendan Behan and Wittgenstein. It is meant for lovers of literature, and for those with a taste for the curiosities of human nature.
Reviews:
Trustpilot
Very Good

The New Oxford Book of Literary Anecdotes by John Gross

An unrivalled collection of literary gossip and intimate sidelights on the lives of the authors The dictionary defines an anecdote as 'a short account of an entertaining or interesting incident', and the anecdotes in this collection more than live up to that description. Many of them are funny, often explosively so. Others are touching, outrageous, sinister, inspiring, or downright weird. They show writers in the English-speaking world from Chaucer to the present acting both unpredictably, and deeply in character. The range is wide - this is a book which finds room for Milton and Margaret Atwood, George Eliot and P. G. Wodehouse, Chinua Achebe and Ian Fleming, Brendan Behan and Wittgenstein. It is also a book in which you can find out which great historian's face was once mistaken for a baby's bottom, which film star left a haunting account of Virginia Woolf not long before her death, and what Agatha Christie really thought of Hercule Poirot - a book not just for lovers of literature, but for anyone with a taste for the curiosities of human nature.

a surprisingly good selection...a collection that will instruct and, more important, give immense pleasure. Contemporary Review, Volume 288 An informative and amusing collection Patrick Richards, Day by Day John Gross's enlightening and hugely enjoyable anthology revivifies the literary dust of many centuries with both wit and grace Peter Parker, TLS Mr Gross has also produced succinct notes to help the reader and has, over all, produced a collection that will instruct and, more importantly, give immense pleasure Contemporary Review Gross widens and strenthens the idea of a literary anecdote, with enriching results. Books like this are usually recommnded as ideal bedtime reading. This one, however, should on no account be allowed in the bedroom, or you will find youself awake in the cold, small hours, still turning the pages. John Carey, Sunday Times John Gross has produced a fascinating book. Jonathan Sale, Financial Times Magazine so many things here to enjoy Jeremy Lewis, Literary Review The New Oxford Book of Literary Anecdotes is a great feast of stories. Craig Brown, Mail on Sunday a pithy and eclectic collection of tales that reveal the vanity, generosity, foolishness and wisdom of writers, but above all their eccentricity...Such anecdotes are literary garnish. Not to be confused with the meat and drink of literature itself, they are the piquant canapes accompanying a writer's life; they should be savoured, swallowed whole with a willing suspension of disbelief, and on no account regurgitated in after-dinner speeches. Ben Macintyre, Times

John Gross was editor of the TLS from 1973-81, editor and staff writer on the New York Times from 1983-8, and theatre critic of the Sunday Telegraph from 1989-2005. For OUP he has edited the Oxford Books of Aphorisms, Essays and Comic Verse, The New Oxford Book of English Prose and After Shakespeare. His other books include The Rise and Fall of the Man of Letters, Shylock: A Legend and its Legacy, and A Double Thread.

GOR002410809
The New Oxford Book of Literary Anecdotes by John Gross
John Gross
Oxford Books of Prose & Verse
Used - Very Good
Hardback
Oxford University Press
2006-05-11
400
0192804685
9780192804686
N/A
Book picture is for illustrative purposes only, actual binding, cover or edition may vary.
This is a used book - there is no escaping the fact it has been read by someone else and it will show signs of wear and previous use. Overall we expect it to be in very good condition, but if you are not entirely satisfied please get in touch with us.