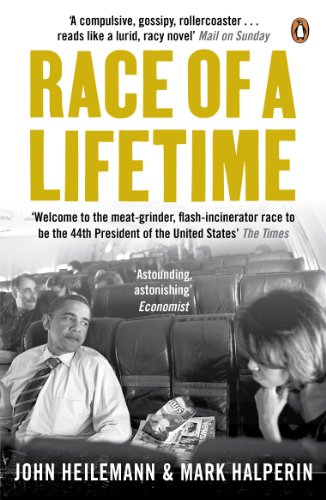 Race of a Lifetime
by John Heilemann

Used Price
$11,69
Free Shipping in the US
Tells the inside story of those thrilling months, from the collapsing House of Clinton to the erratic John McCain and the bewildering Sarah Palin. This book lays bare the characters of the candidates, warts and all, and charts the true path to the White House.
Reviews:
Trustpilot
Very Good

Race of a Lifetime Summary

Race of a Lifetime: How Obama Won the White House by John Heilemann

The runaway number one bestseller. The book that set Washington ablaze. The new non-fiction classic.
Forget everything you think you know about the making of the most powerful man on the planet. Obama's triumph was not inevitable: it was the end product of a brilliant, crazy, unique political campaign.
Race of a Lifetime is the gripping inside story of those thrilling months, from the collapsing House of Clinton to the erratic John McCain and the bewildering Sarah Palin.
Brimming with exclusive revelations, this compulsively readable book lays bare the characters of the candidates, warts and all, and charts the true path to the White House. It's a tour de force: the shocking, funny, and definitive account of the campaign of a lifetime.

Customer Reviews - Race of a Lifetime

Race of a Lifetime Reviews

The most exciting political book of recent years. Election reporting will never be the same again -- Andrew Adonis * News Statesman, Books of the Year *

Welcome to the meat-grinder, flash-incinerator race to be the 44th President of the United States

* The Times *
Incendiary, intriguing, nuanced, compelling. A fantastically detailed and gossipy affair -- Gaby Wood * Observer *
A spicy smorgasbord of observations, revelations and allegation. Leaves the reader with a vivid, visceral sense of the campaign and a keen understanding of the paradoxes and contingencies of history -- Michiko Kakutani * New York Times *
Consistently fascinating... every bit as good as Theordore White's The Making of a President -- Anthony Howard * Daily Telegraph *
Astounding, astonishing. Sleazy, personal, intrusive, shocking - and terribly compulsive. A thoroughly researched, well-paced and very amusing read. High-quality political porn * Economist *
The best account of the triumph of 2008 -- Jonathan Powell * New Statesman, Books of the Year *

Great fun to read. A wealth of insight. Real fly-on-the-wall journalism, where the authors claim to know not just what people said, but what they were thinking

Compulsively readable. You can't put it down

John Heilemann and Mark Halperin are two of the most acclaimed political reporters in the US, with close access to the candidates and their teams. Heilemann is the political columnist at New York magazine. He is a National Magazine Award finalist and a former staff writer for the New Yorker, the Economist, and Wired. Halperin is editor-at-large and senior political analyst for Time, founding editor of The Page, and former political director of ABC News.

GOR001852461
Race of a Lifetime: How Obama Won the White House by John Heilemann
John Heilemann
Used - Very Good
Paperback
Penguin Books Ltd
2010-06-03
464
014104067X
9780141040677
N/A
Book picture is for illustrative purposes only, actual binding, cover or edition may vary.
This is a used book - there is no escaping the fact it has been read by someone else and it will show signs of wear and previous use. Overall we expect it to be in very good condition, but if you are not entirely satisfied please get in touch with us.