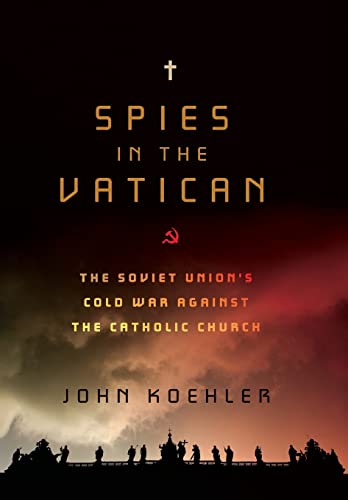 Spies in the Vatican
by John Koehler

Used Price
$41.99
Free Shipping in the US
The shocking history of the Soviet Union's espionage campaign against the Catholic Church.
Reviews:
Trustpilot
Good

Spies in the Vatican Summary

Spies in the Vatican: The Soviet Union's Cold War Against the Catholic Church by John Koehler

Already infamous for the arbitrary, paranoid persecution of its own citizens throughout much of the twentieth century, the Soviet Union-as is revealed in John Koeher's revelatory, eye-opening expose-also waged a vicious espionage campaign against the Catholic Church and its followers. From the persecution of local priests to an assassination order against Pope John Paul II, the KGB viewed Catholicism as a threat to stability in Eastern Europe and treated the church as an enemy of the State.

Lifetime journalist and former U.S. Army Intelligence Officer John Koehler has written the definitive book on this startling history. Using never before seen documents and transcripts, including an order against the Pope that was signed by Gorbachev and nine other Politburo members, Koehler paints a vivid picture of the network of spies and double agents who were working to infiltrate the Church's infrastructure, from the Vatican down to local parishes. But what is most impressive is the overwhelming evidence of the extreme courage of everyday believers who offered shelter and protection to the persecuted, despite the danger of their own arrest or execution.

The KGB's efforts to purge the Soviet Union of the church's "conspiratorial influence" would eventually backfire. The shared sense of unity that developed as a result of these attacks, compounded with the myriad of grievances brought on by decades of brutal Soviet rule, would culminate in the birth of the Solidarity movement after a visit by the Pope in the late 1980s.

This unprecedented chronicle of the Soviet Union's cold war against the Catholic Church is a vital and important contribution to the works of twentieth century history.

Customer Reviews - Spies in the Vatican

Spies in the Vatican Reviews

"This is a shocking expose. Spies in the Vatican makes a real contribution to a better understanding of the Soviet Union and its nefarious doings that extended well beyond its territory." --John Siber, President Emeritus, Boston University

"Readers will be amazed by this account of the Soviet Union's extensive infiltration of the Catholic Church. A journalist and former army intelligence officer, Koehler explains that the KGB relied on Catholic Eastern European agents, many of whom occupied prominent positions in the church hierarchy, and they listened in as U.S. and European leaders briefed the pope. Included are juicy details of the KGB-backed 1981 assassination attempt on the anti-communist pope. Koehler's book will satisfy readers who remain outraged at Communist perfidy."--Publishers Weekly

John Koehler is the author of Stasi: The Untold Story of the East German Secret Police. He has worked as a journalist for nearly forty years with the Associated Press and is a former U.S. Army Intelligence Officer, specializing in counter-espionage and intelligence collection. An adviser to President Reagan from 1985-1989, John is retired and lives in Stamford, Connecticut.

GOR009525801
Spies in the Vatican: The Soviet Union's Cold War Against the Catholic Church by John Koehler
John Koehler
Used - Good
Hardback
Pegasus Books
2009-08-04
352
1605980501
9781605980508
N/A
Book picture is for illustrative purposes only, actual binding, cover or edition may vary.
The book has been read but remains in clean condition. All pages are intact and the cover is intact. Some minor wear to the spine.