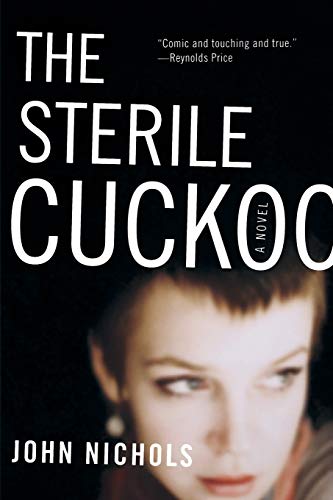 The Sterile Cuckoo
by John Nichols

Used Price
$13.99
Free Shipping in the US
"A hilarious, sad . . . all too true novel about the rough underside of a college love affair."-John Knowles, author of A Separate Peace
Reviews:
Trustpilot
Very Good

The Sterile Cuckoo by John Nichols

When eighteen-year-old Jerry Payne first meets Pookie Adams at the Friarsburg, Oklahoma, bus depot, he is hardly aware that this moment marks the beginning of the most memorable love affair of his life. Overwhelmed (and yet secretly enchanted) by her zany, rambling monologue, Jerry is relieved to leave her in St. Louis as he continues to New York. Thinking he's seen the last of her, he heads off to college, only to be pursued by seventeen lengthy letters, and before he knows it he's involved with a seemingly crazy, startlingly honest girl who adores him. During the next two years, Pookie helps Jerry leave behind the fun-seeking, beer-blasted fraternity man he has become, as she teaches him to open his heart to her. Then, almost as suddenly as she appeared in his life, she disappears from it, leaving in her wake an eternal trail of love and wonder.

John Nichols is the author of On Top of Spoon Mountain, The Wizard of Loneliness, A Ghost in the Music, If Mountains Die, The Milagro Beanfield War, and other works. He lives in Taos, New Mexico.

GOR010449424
The Sterile Cuckoo by John Nichols
John Nichols
Used - Very Good
Paperback
WW Norton & Co
2013-10-18
224
0393348490
9780393348491
N/A
Book picture is for illustrative purposes only, actual binding, cover or edition may vary.
The book has been read, but looks new. The book cover has no visible wear, and the dust jacket is included if applicable. No missing or damaged pages, no tears, possible very minimal creasing, no underlining or highlighting of text, and no writing in the margins.