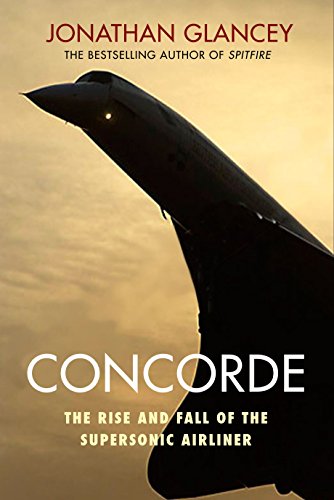 Used Price
$15.99
Free Shipping in the US
A new and boldly original history of the iconic aircraft, by the bestselling author of Spitfire: The Biography and Harrier.
Reviews:
Trustpilot
Very Good

Concorde: The Rise and Fall of the Supersonic Airliner by Jonathan Glancey

In Concorde, Jonathan Glancey tells the story of this magnificent and hugely popular aircraft anew, taking the reader from the moment Captain Chuck Yeager first broke the sound barrier in 1947 through to the last commercial flight of the supersonic airliner in 2003. It is a tale of national rivalries, technological leaps, daring prototypes, tightrope politics, and a dream of a Dan Dare future never quite realized. Jonathan Glancey traces the development of Concorde not just through existing material and archives, but through interviews with those who lived with the supersonic project from its inception. The result is a compelling mix of overt technological optimism, a belief that Britain and France were major players in the world of civil as well as military aviation, and faith in an ever faster, ever more sophisticated future. This is a celebration, as well as a thoroughly researched history, of a truly brilliant machine that became a sky god of its era.

A thoughtful hymn to a great symbol of the analogue age... Concorde will be the standard long read on the subject for a good few years * The Times *
What Jonathan Glancey likes about Concorde could probably fill several books... His history of the Anglo-French supersonic airliner is nevertheless engaging, tracing the arc of Concorde's rise in the 1970s, an unlikely triumph of engineering and international co-operation, through to its decommissioning in 2003... This is an enthusiast's book, but a good one. * Financial Times *
Jonathan Glancey is eminently qualified to write a history of Concorde... He fully appreciates the aesthetics and science of aeronautical engineering, and the lucidity of his prose makes his complex subject clearly comprehensible * Spectator *
How welcome it is to see a specialist book from someone who can write... What might appear to be yet another book on this widely exposed aircraft is actually one very much worth reading. * Pilot *
Glancey skilfully tells the tale of a plane forged from a great trans-national alliance, and how it eventually fell from sky, taking with it - perhaps temporarily - the dream of a world shrunk small by the sheer force of technology. * Wallpaper *

Jonathan Glancey is well known as the former architecture and design correspondent of the Guardian and Independent newspapers. He is also a steam locomotive enthusiast and pilot. A frequent broadcaster, his books include Harrier, Giants of Steam, the bestselling Spitfire: The Biography, Nagaland: A Journey to India's Forgotten Frontier, Tornado: 21st Century Steam, The Story of Architecture, The Train: An Illustrated History.

GOR006913655
Concorde: The Rise and Fall of the Supersonic Airliner by Jonathan Glancey
Jonathan Glancey
Used - Very Good
Hardback
Atlantic Books
2015-10-01
320
178239107X
9781782391074
N/A
Book picture is for illustrative purposes only, actual binding, cover or edition may vary.
This is a used book - there is no escaping the fact it has been read by someone else and it will show signs of wear and previous use. Overall we expect it to be in very good condition, but if you are not entirely satisfied please get in touch with us.