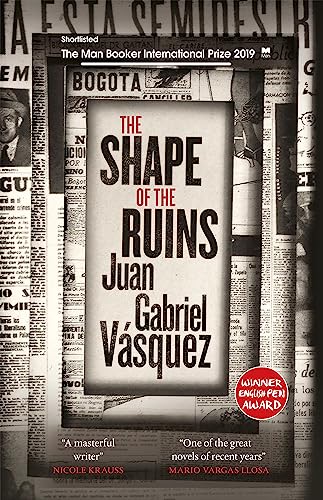 The Shape of the Ruins
by Juan Gabriel Vasquez

Used Price
$14.69
Free Shipping in the US
The most ambitious and rewarding novel to date by the acclaimed Colombian author
Reviews:
Trustpilot
Very Good Good

The Shape of the Ruins Summary

The Shape of the Ruins: Shortlisted for the Man Booker International Prize 2019 by Juan Gabriel Vasquez

"Like Don DeLillo's JFK-themed Libra, the novel is an intoxicating blend of fact and fiction" Glasgow Herald

"A dazzlingly choreographed network of echoes and mirrorings" T.L.S.

It takes the form of personal and formal investigations into two political assassinations - the murders of Rafael Uribe Uribe in 1914, the man who inspired Garcia Marquez's General Buendia in One Hundred Years of Solitude, and of the charismatic Jorge Eliecer Gaitan, the man who might have been Colombia's J.F.K., gunned down on the brink of success in the presidential elections of 1948. Separated by more than 30 years, the two murders at first appear unconnected, but as the novel progresses Vasquez reveals how between them they contain the seeds of the violence that has bedevilled Colombia ever since.

The Shape of the Ruins is Vasquez's most ambitious, challenging and rewarding novel to date. His previous novel, The Sound of Things Falling, won Spain's Alfaguara Prize, Italy's Von Rezzori Prize and the 2014 Dublin IMPAC literary Award.

Translated from the Spanish by Anne McLean

Customer Reviews - The Shape of the Ruins

The Shape of the Ruins Reviews

One of the most original new writers of Latin American Literature. -- Mario Vargas Llosa
For anyone who has read the entire works of Gabriel Garcia Marquez and is in search of a new Colombian novelist, then Juan Gabriel Vasquez . . . is a thrilling new discovery. -- Colm Toibin * Guardian. *
Juan Gabriel Vasquez . . . has succeeded Garcia Marquez as the literary grandmaster of Colombia -- Ariel Dorfman * New York Review of Books *
A masterful writer . . . Juan Gabriel Vasquez has many gifts--intelligence, wit, energy, a deep vein of feeling--but he uses them so naturally that soon enough one forgets one's amazement at his talents, and then the strange, beautiful sorcery of his tale takes hold -- Nicole Krauss
Like Don DeLillo's JFK-themed Libra, the novel is an intoxicating blend of fact and fiction -- Malcolm Forbes * Glasgow Herald *
Juan Gabriel Vasquez's The Shape of the Ruins is a highly sophisticated, fast-moving political thriller set in Colombia and an excellent read -- Alan Furst
Juan Gabriel Vasquez's latest and most ambitious novel.... A dazzlingly choreographed network of echoes and mirrorings * Times Literary Supplement *
With utmost skill, Vasquez has us accompany him in his detective work, proposing a reflection on ghosts from the past and the inheritance of blame, doubt and fear * El Pais *
Absolutely hypnotic, a display of tense, agile, intelligent narrative, it takes conspiracy to a whole other level * El Cultural *
Assembled with satisfying complexity . . . it's his most ambitious and accomplished work yet. -- Daniel Hahn * Prospect *
This clever, labyrinthine, thoroughly enjoyable historical novel by the Colombian author of The Informers and The Sound of Things Falling entangles the two deaths and investigates the internecine politics that lay behind them. -- M John Harrison * Guardian *
Beautifully voiced by his serial translator Anne McLean, Vasquez writes with the elliptical feints and ruses of a story-teller who admires Joseph Conrad in his most delphic moods. The result is sly, subtle, captivating. -- Boyd Tonkin * Spectator. *
The most famous novelist to come out of Colombia since Gabriel Garcia Marquez. His subtle, nuanced fiction uses the tools of documentary reportage - historical sleuthing and interviews with witnesses - to steer readers through the nation's labyrinthine past * 1843 Mag (Economist) *
[A] gripping novel by one of Colombia's finest authors -- Angel Gurria-Quintana * Financial Times *

JUAN GABRIEL VASQUEZ is the author of four previous novels including The Informers, The Secret History of Costaguana, Reputations and The Sound of Things Falling and of the story collection The All Saints' Day Lovers. He is also the translator into Spanish of works by E. M. Forster, John Hersey and Victor Hugo. His own books have been translated into more than twenty languages. ANNE MCLEAN has translated works by Hector Abad, Julio Cortazar and Enrique Vila-Matas. She has twice won the Independent Foreign Fiction Prize, for Soldiers of Salamis by Javier Cercas and for The Armies by Evelio Rosero, and in 2012 was awarded the Spanish Cross of the Order of Civil Merit.

GOR009918245
The Shape of the Ruins: Shortlisted for the Man Booker International Prize 2019 by Juan Gabriel Vasquez
Juan Gabriel Vasquez
Used - Very Good
Paperback
Quercus Publishing
2019-04-11
512
0857056611
9780857056610
N/A
Book picture is for illustrative purposes only, actual binding, cover or edition may vary.
This is a used book - there is no escaping the fact it has been read by someone else and it will show signs of wear and previous use. Overall we expect it to be in very good condition, but if you are not entirely satisfied please get in touch with us.