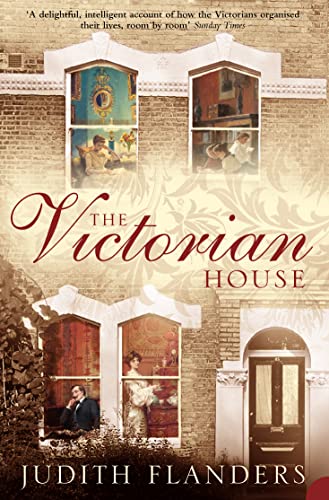 The Victorian House
by Judith Flanders

The bestselling social history of Victorian domestic life, told through the letters, diaries, journals and novels of 19th-century men and women.

The Victorian House: Domestic Life from Childbirth to Deathbed by Judith Flanders

The bestselling social history of Victorian domestic life, told through the letters, diaries, journals and novels of 19th-century men and women.

The Victorian age is both recent and unimaginably distant. In the most prosperous and technologically advanced nation in the world, people carried slops up and down stairs; buried meat in fresh earth to prevent mould forming; wrung sheets out in boiling water with their bare hands. This drudgery was routinely performed by the parents of people still living, but the knowledge of it has passed as if it had never been. Running water, stoves, flush lavatories - even lavatory paper - arrived slowly throughout the century, and most were luxuries available only to the prosperous.

Judith Flanders, author of the widely acclaimed `A Circle of Sisters', has written an incisive and irresistible portrait of Victorian domestic life. The book itself is laid out like a house, following the story of daily life from room to room: from childbirth in the master bedroom, through the scullery, kitchen and dining room - cleaning, dining, entertaining - on upwards, ending in the sickroom and death.

Through a collage of diaries, letters, advice books, magazines and paintings, Flanders shows how social history is built up out of tiny domestic details. Through these we can understand the desires, motivations and thoughts of the age.

Many people today live in Victorian terraces, and so the houses themselves are familiar, but the lives are not. `The Victorian House' will change all that.

`Judith Flanders is the Mary Poppins of academic toil. "Spit spot", she says, and suddenly you have...amusing information...the delight of this book is the intelligence and freshness of its inferences.' Lynne Truss, Sunday Times

`A God-among-loo-books...here, the past is not so much a foreign country as another planet...there is not a single piece of trivia here that I don't feel better for knowing.' Time Out

`An enthralling, entertaining and thought-provoking revelation of the realities of life in the tall, thin, Victorian town house.' Evening Standard

`This book is a splendidly entertaining read, and it also breaks new ground. No one has ever written so interestingly or wittily about housework.' Spectator

Judith Flanders is the author of critically acclaimed `A Circle of Sisters' (2001) - a biography of Alice Kipling, Georgiana Burne-Jones, Agnes Poynder and Louisa Baldwin - which was nominated for the Guardian First Book Award, and `Consuming Passions: Leisure and Pleasure in Victorian England' (2006). She is a frequent contributor to the `Daily Telegraph', the `Guardian', the `Evening Standard', and the TLS.

GOR001226042
The Victorian House: Domestic Life from Childbirth to Deathbed by Judith Flanders
Judith Flanders
Used - Very Good
Paperback
HarperCollins Publishers
2004-08-02
528
0007131895
9780007131891
N/A
Book picture is for illustrative purposes only, actual binding, cover or edition may vary.
This is a used book - there is no escaping the fact it has been read by someone else and it will show signs of wear and previous use. Overall we expect it to be in very good condition, but if you are not entirely satisfied please get in touch with us.