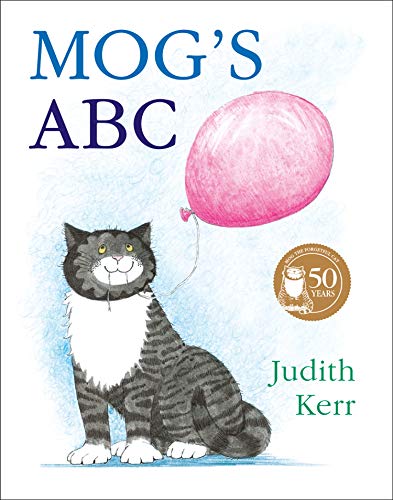 Relive another classic story about everyone's favourite family cat, Mog, in this beautiful new edition. Join the loveable, accident-prone cat as she makes her way to Debbie's birthday party through an alphabet adventure!

Relive another classic story about everyone's favourite family cat, Mog, in this beautiful new edition. Join the loveable, accident-prone cat as she makes her way to Debbie's birthday party through an alphabet adventure!

On the day of Debbie's birthday party, Mog sets off on an adventure through the alphabet. Along the way she meets the dragons in the dark and the jaguar with a jug of jelly. M is for Mog, but to her surprise, it is also for the mad mouse monster of her dream.

Praise for Mog the Forgetful Cat:
`Grandparents are likely to get as much fun out of seeing it again as the new generation of fans just learning to read!' Choice Magazine`

A lovely book for all Mog-fanciers' The Observer

Praise for Goodbye Mog:
`Kerr's warmth, humour and honesty make this an engaging introduction to a difficult topic' Financial Times

`A supremely sensitive story' The Times

`The best, most consoling book for children on the subject or bereavement...a joy to read' The Independent on Sunday

GOR010250522
Mog's Amazing Birthday Caper: ABC by Judith Kerr
Judith Kerr
Used - Like New
Paperback
HarperCollins Publishers
2005-08-01
48
0007171315
9780007171316
N/A
Book picture is for illustrative purposes only, actual binding, cover or edition may vary.
This is a used book - there is no escaping the fact it has been read by someone else and it will show signs of wear and previous use. Overall we expect it to be in very good condition, but if you are not entirely satisfied please get in touch with us.