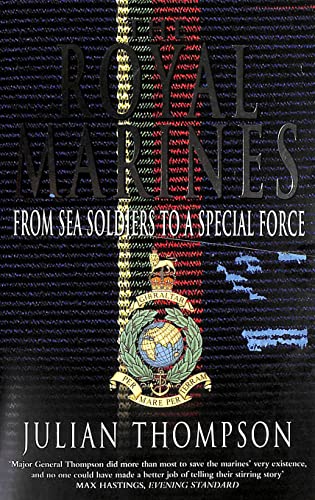 The Royal Marines
by Julian Thompson

In Stock
$8.39
With many new photographs and previously unpublished material from the Imperial War Museum and Royal Marines Museum, these eyewitness accounts and personal narratives bring the history of the Royal Marines vividly to life.
Very Good
7 in stock

The Royal Marines by Julian Thompson

The Royal Marines Commandos are one of the greatest special forces in the world. Their achievement, toughness, professionalism and enterprise puts them in the same league as such other elites as the SAS, the Paras, the US Marines and the French Foreign Legion. This is their stirring and fascinating story, brilliantly and authoritatively told by Major General Julian Thompson, commander of the Commando Brigade in the Falklands.

The Marines of the eighteenth and nineteeth centuries would not recognize their descendents in the second half of the twentieth. Marines shared with their sailor comrades all the disadvantages of serving at sea (as Samual Johnson remarked, 'being in a jail with the chance of being drowned'), but were denied the glittering advantages open to their naval shipmates - including promotion to the highest rank and the lion's share of any prize money (sometimes equivalent to winning the lottery in today's terms).

The Royal Marines: From Sea Soldiers to a Special Force tells how this all changed in the middle of the twentieth century. With their transformation to Commandos and landing craft crews, they set the scene for their leading role for the next fifty years and into the future.

'A fine narrative history... that does not hold back from strong opinion.' Legion

"'Major-General Thompson did more than most men to save the Marines' very existence, and no-one could have made a better job of telling their stirring story' Max Hastings, Evening Standard"

GOR001222387
The Royal Marines by Julian Thompson
Julian Thompson
Used - Very Good
Paperback
Pan Macmillan
2001-04-06
720
0330377027
9780330377027
N/A
Book picture is for illustrative purposes only, actual binding, cover or edition may vary.
This is a used book - there is no escaping the fact it has been read by someone else and it will show signs of wear and previous use. Overall we expect it to be in very good condition, but if you are not entirely satisfied please get in touch with us.