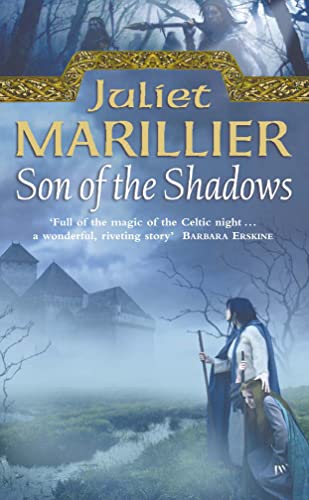 Son of the Shadows
by Juliet Marillier

A powerful and entracing romance, set in the Celtic twilight of 10th century Ireland: a new MISTS OF AVALON for readers of historical fantasy.

Son of the Shadows Summary

Son of the Shadows (The Sevenwaters Trilogy, Book 2) by Juliet Marillier

A powerful and entracing romance, set in the Celtic twilight of 10th century Ireland: a new MISTS OF AVALON for readers of historical fantasy.

The forests of Sevenwaters have cast their spell over Sorcha's daughter Liadan, who, like her mother, has inherited the talent to heal and to see into the spirit world. The forest spirits warn Liadan that she must remain for ever at Sevenwaters if the sacred isles are to be won back from the Britons who took them by force. For the Lord and Lady of the forest spirits have seen in Liadan's future a doomed romance, death; a child; and a terrible choice to be made.

Liadan is taken captive by the Painted Man, who is revealed to be a man quite unlike his legend. Liadan is drawn to him, despite the ancient prophesy of doom, but can she reclaim her life and defy the spirits, or will a curse fall upon Sevenwaters because of her forbidden love? Will the fight for the sacred isles end in tragedy? History and fantasy, myth and magic, legend and love come together in this magical story.

Son of the Shadows Reviews

`I enjoyed it enormously. It is a fantasy, full of the magic of the Celtic night, but it has that wonderful all-important feel of reality... a wonderful, riveting story' Barbara Erskine
`This hugely enjoyable, romantic Celtic fantasy is a terrific book, well written and unputdownable' Bookwatch
`Filled with the powers of earth and sky, lake and forest... sweet and strong as the note of a harp, and painful as a sword thrust deep... a strong sense of realism... a nicely wrought and well-detailed historical fantasy' Locus

Juliet Marillier was born in New Zealand and brought up in Dunedin, the `Edinburgh of the South'. She has a passionate interest in Celtic music and Irish folklore. A mother of two daughters and two sons, she lives in a rural area outside Perth in Western Australia.

GOR001235318
Son of the Shadows (The Sevenwaters Trilogy, Book 2) by Juliet Marillier
Juliet Marillier
The Sevenwaters Trilogy
Used - Very Good
Paperback
HarperCollins Publishers
2002-01-02
560
0006486045
9780006486046
N/A
Book picture is for illustrative purposes only, actual binding, cover or edition may vary.
This is a used book - there is no escaping the fact it has been read by someone else and it will show signs of wear and previous use. Overall we expect it to be in very good condition, but if you are not entirely satisfied please get in touch with us.