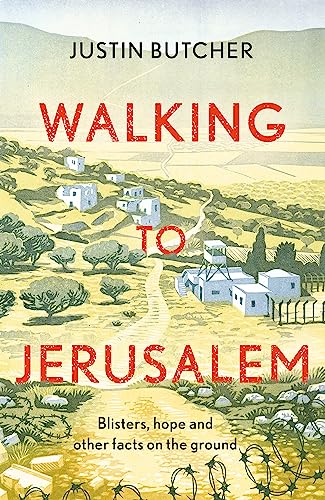 Walking to Jerusalem
by Justin Butcher

Used Price
$12.99
Free Shipping in the US
Part travelogue, part pilgrimage, part walking journal, part political activism - this is the record of a six-month walk from London to Jerusalem.
Reviews:
Trustpilot
Very Good

Walking to Jerusalem: Blisters, hope and other facts on the ground by Justin Butcher

'What's so impressive about Justin Butcher's book is the interweaving of his personal face-to-face experiences in Israel and Palestine against the backdrop of the social and political realities there. This book displays an empathy that is unusual in discussions of that tangled and tragic situation - the kind of empathy that will be essential in arriving at any decent solution to it.' BRIAN ENO

2017 marked three important anniversaries for the Palestinian people: 100 years since the Balfour Declaration; 50 years since the Six-day War; and ten years since the Blockade of Gaza. As an act of penance, solidarity and hope, actor and musician Justin Butcher - along with ten other companions for the full route, plus another hundred joining him for various stretches along the way - walked from London to Jerusalem.

This book is the record of his journey: a combination of walking journal, travel writing and pilgrim stories. It's less of a travel guide to walking across Europe and more an exploration of the many strands radiating from the Holy Land and its narrative, weaving paths across place and history, through the lives of Justin's fellow-walkers - and, of course, his own life.

Between the route itinerary and the themes of Balfour and Christian Zionism, Weizmann and cordite, colonialism, Jerusalem Syndrome and Desert spirituality, Justin charts a chronicle of serendipity: happenstances hilarious, infuriating and occasionally numinous - or, as pilgrims might say, encounters with the Divine.

'This is a gripping and intelligent book that everybody should read.' PATRICK COCKBURN, Middle East correspondent, The Independent

'Wherever you stand on the position of Israel, I recommend reading this book ... this is more than just a campaigning book - it is a
very good read.'

* Sorted Magazine *
A must-read for everyone who yearns for peace in Palestine. * DAVID SUCHET, actor *
An incredibly moving and fascinating book, a powerful pilgrim's tale of love, humour and solidarity. * ROSALIND NASHASHIBI 2017 Turner Prize nominee *
A remarkable work of humanity and humility - a great achievement from an inspiring man. I found it fascinating - a fantastic piece of travel writing, beautifully drawn, very moving and often very funny. So many wonderful descriptions recounting in vivid detail the history and landscapes and people encountered on the way. Utterly evocative. * JOHN MCCARTHY, journalist & broadcaster *
Butcher relights the flames of hope in our age of hopelessness. * YASMIN ALIBHAI-BROWN, Columnist of the Year 2016, British Press Awards *
Justin Butcher's crisp and vibrant writing style grabs the reader's hand and leads us on a fascinating and thoughtful tour through history into the heart of the politics of contemporary Palestine. * JEREMY HARDY, comedian *
Justin Butcher's book is both important and extremely readable - erudite and entertaining on spirituality, history, music, architecture and ecology. But we're always aware of a sense of burning injustice at the plight of the Palestinians in the Occupied Territories of Gaza and the West Bank. The denouement, when they finally arrive in the Holy Land, is both thought-provoking and inspiring. * BARNABY PHILLIPS, award-winning journalist & author, former BBC & Al Jazeera correspondent *
As an Israeli who campaigns for equal rights in Palestine/Israel, I found in Justin's compelling account a clear sense that peace based on justice and equality is no pipe dream but a real possibility in my tortured land. With Justin as a guide, all of us - you, too - can begin to walk the walk. * JEFF HALPER, Director, Israeli Committee Against House Demolitions (ICAHD) *
The world badly needs people like Justin Butcher. Insight and passion, soul and solidarity - to read it is to be reminded that what is right is always found on the other side of fear. * MARK OAKLEY, Dean of St John's, Cambridge, author of The Collage of God & The Splash of Words *
An extraordinary book, Walking to Jerusalem, by the playwright and activist Justin Butcher. It is an account of a pilgrimage undertaken by dozens of ordinary people, who went on foot to that most riven of cities. * i news *

Justin Butcher read Classics Greats at Oxford, trained subsequently at Drama Studio London, and has worked all over the world as actor, writer, director and musician in a vast range of roles and productions in theatre, television, radio and film. He has worked extensively as creative consultant in the business, government and voluntary sectors, across the UK and Europe, Russia, the Middle East and Africa.

GOR009517212
Walking to Jerusalem: Blisters, hope and other facts on the ground by Justin Butcher
Justin Butcher
Used - Very Good
Hardback
Hodder & Stoughton
2018-11-29
320
1473673712
9781473673717
N/A
Book picture is for illustrative purposes only, actual binding, cover or edition may vary.
This is a used book - there is no escaping the fact it has been read by someone else and it will show signs of wear and previous use. Overall we expect it to be in very good condition, but if you are not entirely satisfied please get in touch with us.