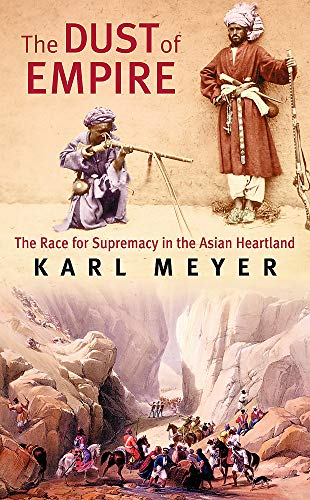 The Dust Of Empire
by Karl Meyer

In Stock
$10.69
A vivid work of narrative history, THE DUST OF EMPIRE situates the newly independent countries of Central Asia within the context of the former Soviet Empire.
Very Good Good
Only 3 left

The Dust Of Empire Summary

The Dust Of Empire: The Race for Supremacy in the Asian Heartland by Karl Meyer

THE DUST OF EMPIRE puts into historical context the countries of Central Asia - Eurasia - which are among the most fabled and least known in the world today. Since the collapse of the Soviet Union, many of these countries that were once colonies are now independent, and ancient rivalries have been rekindled where much is at stake, including one of the world's last untapped oilfields. Meyer describes the conflicts arising from the proliferation of self-determination and nation-states after the end of the Second World War, and assesses the brutality of empire and the expansionist fervour of the nineteenth century.

The subsequent chapters cover a different region or country in Eurasia: Russia, Persia/Iran, Pakistan, Afghanistan and the Caucausus. THE DUST OF EMPIRE is an impeccably researched and absorbing foray into the history and geo-political issues central to each of these countries, and in particular how these relate to current Western foreign policy and business interests.

The Dust Of Empire Reviews

Not only readable and well informed but timely to an almost painful degree ... This book is a rattling good yarn * Geoffrey Wheatcroft, NEW YORK TIMES BOOK REVIEW *
Deserves to be read in the White House ... Scholarly and eloquently told, the stories of empire in the Asian heartland have an edge of urgency ... With a sense of easy mastery, [Meyer] gazes broadly at the longest view * LOS ANGELES BOOK REVIEW *
[A] poweful introduction to this poorly understood region...Meyer combines scholarly expertise with journalistic detail in a rich account relaying formative events through extensive research and poignant personal anecdotes. * PUBLISHERS WEEKLY *
Both a scholar and a journalist, Meyer's understanding of the region's intricate geotopical history is matched by his ability to tell a good story. THE DUST OF EMPIRE is as gripping as any thriller, a deftly written overview by an expert in the field. * GEOGRAPHICAL MAGAZINE *

A former New York Times editor, Karl Meyer is now editor at World Policy Journal and the co-author of the acclaimed TOURNAMENT OF SHADOWS.

GOR001237662
The Dust Of Empire: The Race for Supremacy in the Asian Heartland by Karl Meyer
Karl Meyer
Used - Very Good
Paperback
Little, Brown Book Group
2004-05-06
288
0349117438
9780349117430
N/A
Book picture is for illustrative purposes only, actual binding, cover or edition may vary.
This is a used book - there is no escaping the fact it has been read by someone else and it will show signs of wear and previous use. Overall we expect it to be in very good condition, but if you are not entirely satisfied please get in touch with us.