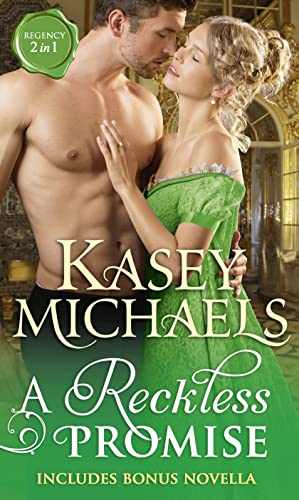 A Reckless Promise
by Kasey Michaels

London's Little Season is so scandalous...

A Reckless Promise (The Little Season, Book 3) by Kasey Michaels

London's Little Season is so scandalous...

It was an offhand vow often made on the battlefield. But Darby Travers, Viscount Nailbourne, now has his late comrade's young daughter on his doorstep. Worse, his new ward comes with an overprotective, mistrustful chaperone - the child's aunt, Sadie Grace Boxer. Darby is quite sure that behind her lovely facade, lies a secret.

Sadie Grace faced many trials working alongside her brother in his surgery, but none prepared her for the world she's thrust into on his passing. Navigating the ton, with its endless ball gowns and parties, is difficult enough, but hiding the truth about her niece while the handsome and sophisticated Viscount watches her every move proves nearly impossible. When the past catches up with her, will she be able to trust in Darby...

"Michaels' new Regency miniseries is a joy...You will laugh and even shed a tear over this touching romance."
-RT Book Reviews on How to Tempt a Duke

"A poignant and highly satisfying read ... filled with simmering sensuality, subtle touches of repartee, a hero out for revenge and a heroine ripe for adventure. You'll enjoy the ride."
-RT Book Reviews on How to Tame a Lady

GOR008308333
A Reckless Promise (The Little Season, Book 3) by Kasey Michaels
Kasey Michaels
The Little Season
Used - Like New
Paperback
HarperCollins Publishers
2017-04-06
304
0263930831
9780263930832
N/A
Book picture is for illustrative purposes only, actual binding, cover or edition may vary.
This is a used book - there is no escaping the fact it has been read by someone else and it will show signs of wear and previous use. Overall we expect it to be in very good condition, but if you are not entirely satisfied please get in touch with us.