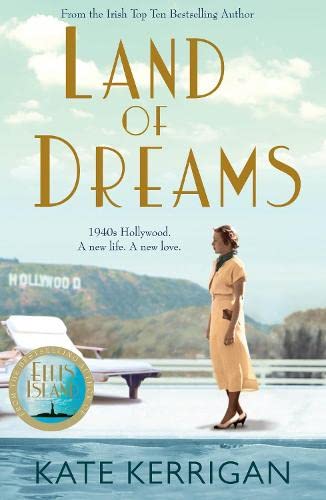 Land of Dreams
by Kate Kerrigan

Land of Dreams by Kate Kerrigan

A mother's love, a woman's ambition and a Hollywood romance in a time of war. Land of Dreams is the stunning third novel in the Ellis Island trilogy.

Ellie's idyllic and bohemian family lifestyle on Fire Island is shattered when her eldest son, Leo, runs away to Hollywood to seek his fame and fortune. Ellie is compelled to chase after him, uprooting her youngest son and long-time friend and confidante Bridie as she goes.

Ellie fashions a new home amongst the celebrities, artists and movie moguls of the day to appease Leo's star-studded dreams. As she carves out a new way of life, Ellie is drawn towards intense new friendships. Talented composer Stan is completely different to any other man she has previously encountered whilst kindred spirit Suri opens Ellie's eyes to a whole new set of injustices.

Ellie sees beyond the glitz of 1940s Hollywood, realising that the glamorous and exciting world is also a dangerous place overflowing with vanity and greed. It is up to Ellie to protect her precious family from the disappointments such surroundings can bring and also from the more menacing threats radiating from the war raging in Europe.

GOR004777025
Land of Dreams by Kate Kerrigan
Kate Kerrigan
Used - Very Good
Paperback
Pan Macmillan
2013-04-11
336
1447210794
9781447210795
N/A
Book picture is for illustrative purposes only, actual binding, cover or edition may vary.
This is a used book - there is no escaping the fact it has been read by someone else and it will show signs of wear and previous use. Overall we expect it to be in very good condition, but if you are not entirely satisfied please get in touch with us.