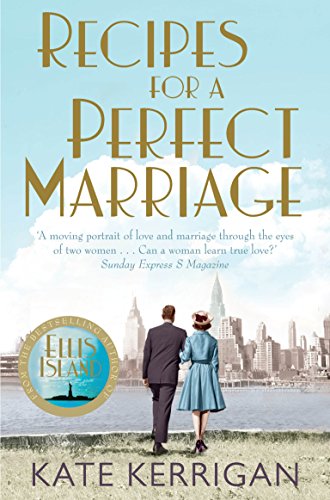 Recipes For A Perfect Marriage
by Kate Kerrigan

Used Price
$12.69
Free Shipping in the US
A wonderful portrait of marriage, love and relationships
Reviews:
Trustpilot
Very Good

Recipes For A Perfect Marriage Summary

Recipes For A Perfect Marriage by Kate Kerrigan

"They say there is no such thing as a perfect marriage, but of course there is. A perfect marriage is where two people live together for most of their lives until death separates them.

What there is no such thing as is an easy marriage. And when it comes to love, people have somehow come around to equating love with ease".

New York food writer Tressa returns from honeymoon worried that she has married her impossibly handsome new husband Dan out of late-thirties panic instead of love.

In 1930's Ireland, her grandmother, Bernadine, is married off to the local schoolteacher after her family are unable to raise a dowry for her to marry her true love, Michael.

During the first year of her marriage, Tressa distracts herself from her stay-or-go dilemma by working on her grandmother's recipes, searching for solace and answers through their preparation.

Through the stories of these two women RECIPES FOR A PERFECT MARRIAGE challenges the modern ideal of romantic love as a given and ponders whether true love can really be learned.

'This story is written with so much heart, its beat is palpable in every word on every page'

Cecelia Ahern, author of P.S., I LOVE YOU

GOR004920799
Recipes For A Perfect Marriage by Kate Kerrigan
Kate Kerrigan
Used - Very Good
Paperback
Pan Macmillan
2012-03-29
336
1447213122
9781447213123
N/A
Book picture is for illustrative purposes only, actual binding, cover or edition may vary.
This is a used book - there is no escaping the fact it has been read by someone else and it will show signs of wear and previous use. Overall we expect it to be in very good condition, but if you are not entirely satisfied please get in touch with us.