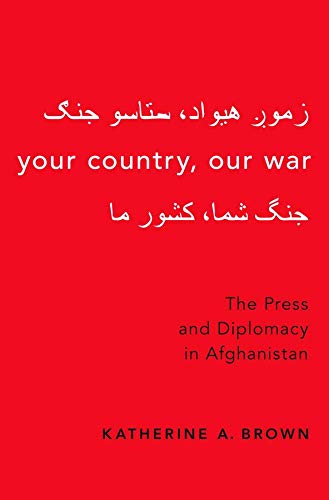 Used Price
$20.99
Free Shipping in the US
Based on extensive fieldwork in Afghanistan and eight years of interviews, this book reviews the dynamics between Afghan and U.S. journalists, and the global diplomatic power of the American press within the context of the post-9/11 era.
Reviews:
Trustpilot
Like New

Your Country, Our War Summary

Journalists are actors in international relations, mediating communications between governments and publics, but also between the administrations of different countries. American and foreign officials simultaneously consume the work of U.S. journalists and use it in their own thinking about how to conduct their work. As such, journalists play an unofficial diplomatic role. However, the U.S. news media largely amplifies American power. Instead of stimulating greater understanding, the U.S. elite, mainstream press can often widen mistrust as they promote an American worldview and, with the exception of some outliers, reduce the world into a tight security frame in which the U.S. is the hegemon. This has been the case in Afghanistan since 2001, particularly as emerging Afghan journalists have relied significantly on U.S. and other Western news outlets to report events within their government and their country. Based on eight years of interviews in Kabul, Washington, and New York, Your Country, Our War demonstrates how news has intersected with international politics during the War in Afghanistan and shows the global power and reach of the U.S. news media, especially within the context of the post-9/11 era. It reviews the trajectory of the U.S. news narrative about Afghanistan and America's never-ending war, and the rise of Afghan journalism, from 2001 to 2017. The book also examines the impact of the American news media inside a war theater. It examines how U.S. journalists affected the U.S.-Afghan relationship and chronicles their contribution to the rapid development of a community of Afghan journalists who grappled daily with how to define themselves and their country during a tumultuous and uneven transition from fundamentalist to democratic rule. Providing rich detail about the U.S.-Afghan relationship, especially former President of Afghanistan Hamid Karzai's convictions about the role of the Western press, we begin to understand how journalists are not merely observers to a story; they are participants in it.

Customer Reviews - Your Country, Our War

Your Country, Our War Reviews

I've been waiting for a book like this. And here it is: a thoughtful, gripping account about how journalists have covered the war in Afghanistan and about how that coverage has both shaped and been shaped by the decisions of American political leaders. Katherine Brown's easy prose is matched only by her keen analysis of a country and a topic she knows better than anyone else. This book should be required reading in the White House, on Capitol Hill, the corridors of the Pentagon, and anywhere else people want to better understand the role of the press in advancing U.S. foreign policy. * Rear Adm. John F. Kirby, USN (ret.), CNN Diplomatic and Military analyst, and Former Assistant Secretary of State for Public Affairs *
This book proves that stories matter. You won't look at Afghanistan, or the American press, the same way again. A terrific and persuasive account of an important part of our global history. Many lessons in this book! * Farah Pandith, Former first-ever Special Representative to Muslim Communities, U.S. Department of State *
From the eye of the storm, Brown offers an important examination of how worldview, diverging perspectives on the mission of journalism, and the grim realities of war can create a huge disconnect in how local and international media portray global crises. * Lawrence Pintak, author of America & Islam: Soundbites, Suicide Bombs, and the Road to Donald Trump *
Brown's extraordinary book furnishes a brace of new insights into the role that journalists and journalism have played in the Afghan War. Building on the author's unusual access and her painstaking attention over time, Brown provides valuable insights into the strengths and weaknesses of political leadership in Kabul and Washington, and the enduring strains relating to coverage of a diffuse and complex conflict that started as the 'Good War' and becomes the 'Endless' one. * Monroe Price, Annenberg School for Communication *
Your Country, Our War is essential reading for anyone interested in the intersections of journalism and diplomacy. Katherine Brown's on-the-ground experience in Afghanistan and her sophisticated understanding of international relations enrich this valuable book. Afghanistan is viewed by the rest of the world through the filter of journalism, which both magnifies and distorts, and Brown provides crisp analysis of how this works. * Philip Seib, University of Southern California *

Katherine Brown is Adjunct Professonial Lecturer in the School of International Service at American University. She is also currently the President and CEO of Global Ties U.S. She began her career in the National Security Council at the White House and first traveled to Afghanistan in 2003 as a U.S. embassy press aide, to return several times over 13 years.