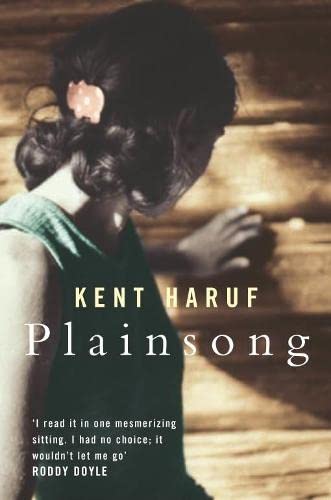 In Stock
7,69 $
A novel about everyday life and love in Holt County, Colorado
Very Good
10 in stock

Set in Colorado in the 1980s, Plainsong tells the story of various Holt residents. There's teenager Victoria Roubideaux, pregnant and homeless, taken in by two ageing, shy and somewhat taciturn cattle-farming brothers -- and the changes wrought in all their lives as a result. Then there's high-school teacher and single-father, Tom Gutherie, who has two sons, Ike and Bobby, and a second chance at romance in the shape of colleague Maggie Jones.

Filled with unforgettable characters, Plainsong is both convincing and compelling; a glorious, eloquent waltz of a novel.

'Like all the best novels, Plainsong takes you into a world that is at once real and vividly imagined. Here is a poetry of landscape, a tender and passionate evocation of ordinary people in majestic country . . . written with a kind of compassion that makes it ultimately powerfully uplifting' Niall Williams

'With its gentle touch and simple, precise prose, Haruf's novel scores a direct hit on his readers' hearts. Plainsong is a perfectly formed, beautifully executed piece of writing that will stay with you long after you reluctantly put it down' Mariella Frostrup, Mail on Sunday

In Holt, Colorado, Tom Guthrie is struggling to bring up his two young sons alone. In the same town, school girl Victoria Roubideaux finds herself pregnant and homeless. Whilst Tom's sons find their way forward without their mother, quiet and gentle Harold and Raymond McPheron agree to take Victoria in, unaware that their lives are about to change forever.

A novel of haunting beauty, Plainsong explores the grace and hope of every human life and mankind's infinity capacity for love.

'Perfectly formed, beautifully executed' Mariella Frostrup 'Beautifully crafted, alive and quietly magnificent. I read it in one mesmerising sitting. I had no choice; it wouldn't let me go' Roddy Doyle 'Plainsong is nothing short of a revelation. I don't expect to read a better novel this year. Or next, for that matter.' Richard Russo 'So delicate and lovely that it has the power to exalt the reader' New York Times 'Satisfying and warm, Plainsong is as purehearted a novel as they come' Austin Chronicle 'Plainsong becomes a story of mythic proportion, and not just a story about a small town in the American West, but a story of universal concern. Our story' Boston Review 'I've had the delightful experience once again of becoming so absorbed in a book that I couldn't have slowed down if I tried. The book is Kent Haruf 's Plainsong, the most controlled, cohesive novel I've come across in a long time. By this I mean that its various elements -- character, setting, plot, language, even the names, even the title -- all add up to a work as flawlessly unified as a short story by Poe or Chekhov ... At certain points I was horrified by the austerity of the isolated lives in this story, and yet on every page I savoured the beauty of the telling' Chicago Tribune 'Plainsong is a beauty, as spare and heartbreaking as an abandoned homestead cabin, always tough but humane, never sentimental. I loved the prose, as bright and hard as the winter sun sparkling off a sandy snow bank; and the characters, scrubbed to their essentials by the extremes of the Great Plains weather. It's a story that draws the reader like a heat mirage' James Crumley 'True to the country he writes about, Haruf builds his characters out of small gestures and daily rituals, not dialogue. Theirs is a deep language, like the rumble before an earthquake' L.A. Times '[Haruf] writes with a plainspoken, hardscrabble edge that saves his story from sentimentality. It's a noun-and-verb-only style that's part Russell Banks, part Raymond Carver, but altogether his own ... Kent Haruf 's splendid Plainsong succeeds beautifully. Elegant in its simplicity, elemental in its power, it arouses deep and hard-earned emotions' Newsday 'Like all the best novels, Plainsong takes you into a world that is at once real and vividly imagined. Here is a poetry of landscape, a tender and passionate evocation of ordinary people in majestic country. It is a novel of the young and old, of the bonds that bind us to each other, and written with a kind of compassion that makes it ultimately powerfully uplifting' Niall Williams 'Plainsong is a well-crafted investigation into how disparate voices, each unique and interconnected, can come together in the most unlikely of circumstances ... Haruf offers a fresh approach by creating layers which intensify and deepen as the novel progresses, alternating between each character's life at every chapter' Observer 'With deftness and precision, Plainsong orchestrates the overlapping lives of these and other characters ... Haruf 's descriptions are sublime in their exacting simplicity ... A beautiful, contemporary novel that reads very much like a story from another time' Philadelphia Inquirer 'Holt, Colorado, a tiny prairie community near Denver, is both the setting for and the psychological matrix of Haruf 's beautifully executed new novel ... Walking a tightrope of restrained design, Haruf steers clear of sentimentality and melodrama while constructing a taut narrative in which revelations of character and rising emotional tensions are held in perfect balance. This is a compelling story of grief, bereavement, loneliness and anger, but also of kindness, benevolence, love and the making of a strange new family' Publishers Weekly 'Ken Haruf's prose murmurs a haunting melody through the intertwined lives of a Colorado community. It is a simple tale of life, death, love and hatred' The Times 'A lovely read, illuminated by sparks of spare beauty' Time 'It's written in a flat, palms-on-the-table style, which effectively suppresses what could have been sentimental in the story. Plenty to gulp over still, though. A first-rate, old-fashioned read' Time Out 'Plainsong is the unisonous austere chant of a church service, and the hundreds of thousands of fans of this book have been nothing less than devotional in their praise of Kent Haruf ' Times Literary Supplement 'The emotional register of Plainsong, though kept in check by understatement and a stoic approach to the vicissitudes of life, is powerful. And Haruf works a quiet magic in the way he fits his characters' lives in with the landscape and weather that surround them' Washington Post Book World

Kent Haruf is the author of six novels (and, with the photographer Peter Brown, West of Last Chance). His honours include a Whiting Foundation Writers' Award, the Mountains & Plains Booksellers Award, the Wallace Stegner Award, and a special citation from the PEN/Hemingway Foundation; he was also a finalist for the National Book Award, the Los Angeles Times Book Prize, and The New Yorker Book Award. Benediction was shortlisted for the Folio Prize. He died in November 2014, at the age of seventy-one.

GOR001223047
Plainsong by Kent Haruf
Kent Haruf
Used - Very Good
Paperback
Pan Macmillan
2001-04-06
320
0330393146
9780330393140
Short-listed for United States National Book Awards: Fiction 1999
Book picture is for illustrative purposes only, actual binding, cover or edition may vary.
This is a used book - there is no escaping the fact it has been read by someone else and it will show signs of wear and previous use. Overall we expect it to be in very good condition, but if you are not entirely satisfied please get in touch with us.