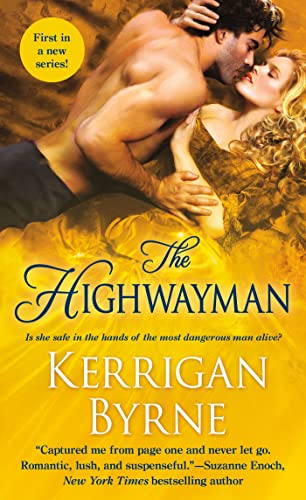 The Highwayman
by Kerrigan Byrne

Used Price
$8.39
Free Shipping in the US
A Beautiful Widow: Farah MacKenzie has known love and heartbreak. It was a young, passionate love that she doesn't believe any man can replace and it ended tragically when her husband was sent to Newgate and died there. Years later, Farah encounters The Black Heart of Ben More, Dorian Blackwell, one of the wealthiest, most dangerous men in London.
Very Good

The Highwayman by Kerrigan Byrne

A Beautiful Widow: Farah Leigh MacKenzie has known love and heartbreak. It was a young, passionate, forbidden love that she doesn't believe any man can replace and it ended tragically when her husband was sent to Newgate and died there. Years later, the beautiful young widow works for the Bow Street Runners and it is there that she encounters The Black Heart of Ben More, Dorian Blackwell, one of the wealthiest, most powerful, most dangerously lethal men in London. She is drawn instantly to this man who should make her want to flee. And for Dorian what he wants, he gets and he wants no needs Farah as he has needed no one else. Kidnapped!: When Dorian kidnaps Farah from her home and whisks her away to his lush sanctuary in wild Highlands of Scotland, Farah believes that her life is over. But in fact Dorian has saved her, for Farah is hiding secrets of her own-secrets that have put her life in danger. But Dorian trades in secrets, especially ones as juicy as hers. He makes a scandalous demand, marry him and he will protect her and he will restore what was stolen from her all those years ago. In return, she will help exact revenge on his enemies. But what Dorian does not expect is to be caught so sweetly and irrevocably by a woman who threatens everything he holds dear.

"A passionate, lyrical romance that takes your breath away. From the first page, you'll fall in love." --Elizabeth Boyle, New York Times Bestseller

Whether she's writing about Celtic Druids, Victorian bad boys, or brash Irish FBI Agents, Kerrigan Byrne uses her borderline-obsessive passion for history, her extensive Celtic ancestry, and her love of Shakespeare in every book. She lives at the base of the Rocky Mountains with her handsome husband and three lovely teenage girls, but dreams of settling on the Pacific Coast.

CIN000281872
The Highwayman by Kerrigan Byrne
Kerrigan Byrne
Used - Very Good
Paperback
St Martin's Press
2015-10-12
384
1250076056
9781250076052
N/A
Book picture is for illustrative purposes only, actual binding, cover or edition may vary.
This is a used book - there is no escaping the fact it has been read by someone else and it will show signs of wear and previous use. Overall we expect it to be in very good condition, but if you are not entirely satisfied please get in touch with us.