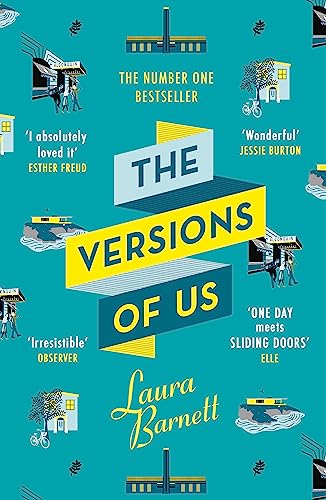 The Versions of Us
by Laura Barnett

The Versions of Us Summary

The Versions of Us: The Number One bestseller by Laura Barnett

A RICHARD AND JUDY BOOK CLUB PICK AND NUMBER ONE BESTSELLER

Eva and Jim are nineteen, and students at Cambridge, when their paths first cross in 1958. Jim is walking along a lane when a woman approaching him on a bicycle swerves to avoid a dog. What happens next will determine the rest of their lives. We follow three different versions of their future - together, and apart - as their love story takes on different incarnations and twists and turns to the conclusion in the present day.

The Versions of Us is an outstanding debut novel about the choices we make and the different paths that our lives might follow. What if one small decision could change the rest of your life?

Customer Reviews - The Versions of Us

The Versions of Us Reviews

Laura Barnett was born in 1982 in south London, where she now lives with her husband. She studied Spanish and Italian at Cambridge University, and newspaper journalism at City University, London.

As a freelance arts journalist, features writer and theatre critic, Laura has worked for the GUARDIAN, the OBSERVER, the DAILY TELEGRAPH and other national newspapers and magazines. Her first non-fiction book, ADVICE FROM THE PLAYERS - a compendium of advice for actors - was published in 2014 by Nick Hern Books.

THE VERSIONS OF US, her debut novel, was a number one bestseller and has been translated into 23 languages. TV rights have been optioned by Trademark Films. Her second novel, GREATEST HITS, was published in 2017, along with an accompanying soundtrack by Kathryn Williams.

GOR007196086
The Versions of Us: The Number One bestseller by Laura Barnett
Laura Barnett
Used - Very Good
Paperback
Orion Publishing Co
2015-12-31
432
1474600891
9781474600897
Short-listed for British Book Industry Awards Debut Fiction Book of the Year 2016
Book picture is for illustrative purposes only, actual binding, cover or edition may vary.
This is a used book - there is no escaping the fact it has been read by someone else and it will show signs of wear and previous use. Overall we expect it to be in very good condition, but if you are not entirely satisfied please get in touch with us.