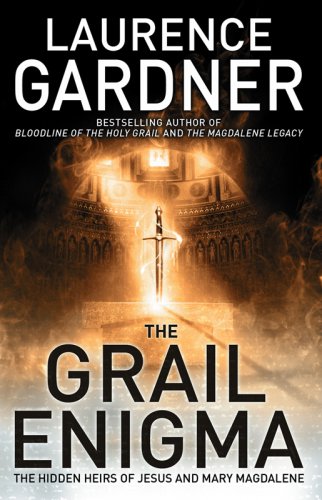 The Grail Enigma
by Laurence Gardner

The incredible conclusion to the investigation into Jesus and Mary's bloodline which first began in Gardner's Bloodline of the Holy Grail. Now Gardner reveals centuries of previously inaccessible archives that show the truth about what became of Jesus and Mary Magdalene's offspring.

The Grail Enigma: The Hidden Heirs of Jesus and Mary Magdalene by Laurence Gardner

The incredible conclusion to the investigation into Jesus and Mary's bloodline which first began in Gardner's Bloodline of the Holy Grail. Now Gardner reveals centuries of previously inaccessible archives that show the truth about what became of Jesus and Mary Magdalene's offspring.

Much has been written recently about the marriage of Jesus and Mary Magdalene, whether he and Mary had children, and what became of them. The Grail Enigma is the first book that can answer those questions in amazingly accurate detail. Unique to any book on the subject, this contains full genealogical charts that trace the messianic offspring, historically named Tamar, Joshua and Joseph, and their lineage through 600 years through to Arthur Pendragon.

Gardner's unrivalled access to Vatican archives reveal Christian manuscripts dating back to the 2nd century that document Mary as the 'bride of Christ' and Jesus's heirs who became very influential within the Roman Empire but were hunted down in the years following the crucifixion. Four hundred years later, the New Testament gospels of Mathew, Mark and Luke were compiled removing all reference to the messianic marriage and bloodline, but the older gospels still document their legacy.

Tracing the messianic line through 600 years since Jesus's crucifixion, Gardner explains how the fate of the messianic line became encoded in the Grail legend of King Arthur. The mythology of Arthur also reflected his messianic ancestor Jesus - in the messianic tradition, these `Once and Future Kings' both chosen to lead their people and prophesied to return again.

Using new and previously unpublished documentary archives, The Grail Enigma traces the detailed history of the descendants of Jesus and how the Roman Church sought to destroy their legacy and the most fundamental elements of the original Christian movement.

Praise for the Bloodline series:
"A controversial and uniquely comprehensive book of Messianic descent, compiled from the most intriguing histories ever written."
Publishing News

"This book, provocative as it may be, is not a work of fiction, but the product of years of painstaking research. Committed Christians will find it casts fascinating light on the origins of their beliefs."
Daily Mail

Laurence Gardner, a Fellow of the Society of Antiquaries of Scotland, is a historian, lecturer and broadcaster. Distinguished as the Chevalier de St. Germain, he is attached to the European Council of Princes as the Jacobite Historiographer Royal. He is a Knight Templar of St. Anthony and Prior of the Sacred Kindred of St. Columba.

GOR001953673
The Grail Enigma: The Hidden Heirs of Jesus and Mary Magdalene by Laurence Gardner
Laurence Gardner
Used - Very Good
Paperback
HarperCollins Publishers
2008-03-03
448
0007266952
9780007266951
N/A
Book picture is for illustrative purposes only, actual binding, cover or edition may vary.
This is a used book - there is no escaping the fact it has been read by someone else and it will show signs of wear and previous use. Overall we expect it to be in very good condition, but if you are not entirely satisfied please get in touch with us.