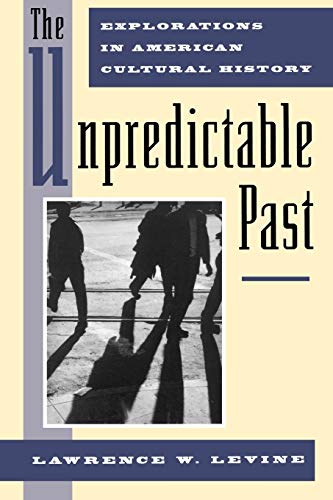 The Unpredictable Past
by Lawrence W. Levine (Professor of History, University of California, Berkeley)

Used Price
$21,99
Free Shipping in the US
These fourteen essays cover American history, historiography, aspects of black culture, and American popular culture (in the Great Depression). It is a collection of stimulating, original essays that continually offer fresh insights into the black experience and culture in general in America.
Reviews:
Trustpilot
Very Good Good

The Unpredictable Past Summary

The Unpredictable Past: Explorations in American Cultural History by Lawrence W. Levine (Professor of History, University of California, Berkeley)

Lawrence Levine is a major American historian, President-Elect of the Organization of American Historians, and author of one of the most significant books in both black history and cultural history, Black Culture and Black Consciousness (OUP/USA 1977). These fourteen essays, written over two decades, cover American history, historiography, aspects of black culture, and American popular culture (during the Great Depression). A number of them examine aspects of black culture that were dealt with from a different perspective in Black Culture and Black Consciousness. Some deal with such related topics as the transfer of African culture to America, Marcus Garvey as a black leader, the development of black culture in the 1920s, and the role of jazz in American culture. Several essays involve Levine's recent concern with American popular culture during the Great Depression of the 1930s, including such areas as film, radio, and photography. Altogether this is a collection of stimulating, original essays that continually offer fresh insights into the black experience and culture in general in America. The book should have appeal to college courses in black history, American culture, and American history from 1900 to 1945.

Customer Reviews - The Unpredictable Past

The Unpredictable Past Reviews

"An exceptional volume of essays in comprehensive history that incorporate ethnic, racial, regional, division, and gender groups omitted or scorned in the past and thought to be too insignificant for focus or discussion....Highly recommended."--Library Journal
"Everyone interested in the evolution of modern thought and culture should be thrilled to have these innovative and provocative essays in such accessible form. Levine has long been a shrewd essayist and an engaging polemicist. His passionate commitment to the study of popular culture is both salutary and sensible. The particular application of that commitment to African-American culture during the Great Depression is most commendable. This volume deserves a hearty welcome."--Michael Kammen, Cornell University
"The Unpredictable Past is a brilliant reminder of why Lawrence W. Levine has long been required reading for everyone interested in American culture and its history."--Henry Louis Gates, Jr., Harvard University
"Lawrence Levine scrutinizes American culture that is popular--in Depression era movie theaters, nineteenth-century black neighborhoods, and, even the audience of a historians' professional meeting as the generations were changing. Always penetrating, unfailingly good-humored, this book, like its author, brings the gift of affection to the study of ordinary Americans."--Nell Irvin Painter, Princeton University
"In these delightful and illuminating essays, Larry Levine demonstrates his astonishing virtuosity as a cultural historian. Ranging from the slave songs of the 1830s to the Hollywood films of the 1930s, from animal trickster tales to Shakespeare's plays, from jazz to photography, Levine brings us rich and neglected dimensions of American culture. The past may indeed be unpredctable, but we can predict that Levine's commentaries on the past will be filled with wit, compassion, and originality."--Roy Rosenzweig, The State University in Northern Virginia
"By entering the debate in contemporary historiography between concensus history and current social and cultural history, Levine dignifies the discipline. This volume clarifies the contributions of the new social history without overstating its importance. He challenges future generations of historians to consider all evidence from all groups in an assessment of the whole. This is an inspired work that stimulates thoughtful approaches to history."--K. Lynn Stoner, Arizona State University
"Well done; Levine is a fine writer appreciative of the nuances of American culture."--June Sochen, Northern Illinois University
"Should be read by everyone who teaches a course in multicultural education, Africana studies, ethnic studies, or American cultural studies. The pervasive lack of information and misinformation regarding the cultural background and the acculturation of Africans in the U.S. and their impact on the larger society are illuminated in a lucid, scholarly style. This work is an unequivocal contribution toward understanding American culture and why things are the way they are today."--Warren C. Swindell, Indiana State University
"Wonderful essays! Rich, full of useful insights for teaching."--Mart Stewart, Western Washington University
"Wonderful essays, well worth having collected in one volume."--Philip Scraton, Rutgers University
"Excellent essays with timely subject matter."--Robert L. Cole, Ripon College
"Superb. Larry Levine has once again demonstrated why he is America's leading cultural historian. He has taken past events and shown us how to reexamine them. He is especially goo when examining the African-American past."--Clarence Taylor, Lemoyne College
"Students of American cultural history will be glad of the chance this book provides to see Levine's important work steadily and whole."--American Historical Review
"Excellent series of essays....[W]ill recommend it for our library."--Sylvia McGrath, Stephen F. Austin State University
"This is a most welcome collection of essays by historian Lawrence Levine. Levine is at his best in his examination of the nuances of various cultural forms. Not only does levine offer new and exciting ways to look at cultural history, he also helps to revitalize the field in general."--Nina Silber, Boston University

Lawrence W. Levin is Margaret Byrne Professor of History at the University of California, Berkeley, and a recipient of the MacArthur Prize Fellowship. He is the author of numerous books, the most recent of which include Highbrow/Lowbrow: The Emergence of Cultural Hierarchy in America (1988) and Black Culture and Black Consciousness: Afro-American Folk Thought from Slavery to Freedom (Oxford, 1977), which won the Chicago Folklore Prize.