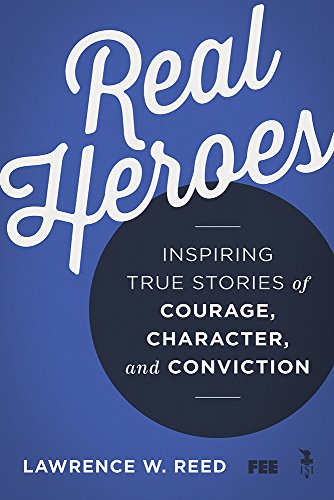 Used Price
$10.99
Free Shipping in the US
Presents men and women whose choices and actions make them heroes. The forty people Lawrence W. Reed profiles in this accessible, inspirational book are not the usual examples. Some are well-known historical and cultural figures, but Real Heroes also features many remarkable people you have never heard of.
Reviews:
Trustpilot
Very Good

Character is indispensable to a successful career and a happy life. It's also essential to our liberty, because if a society can't govern itself, then government must step in to police our decisions and actions.

Sounds pretty heavy, right? Well, the good news is that character is nothing more than the sum of our choices, and it is something every one of us has total control over.

And here's even better news: this book gives us flesh-and-blood models-men and women whose choices and actions make them heroes.

The forty people Lawrence W. Reed profiles in this accessible, inspirational book are not the usual examples. Some are well-known historical and cultural figures, yes-but Real Heroes also features many remarkable people you have never heard of.

Reed ranges far and wide-from the distant past to the present; from the United States, to Europe, to Asia; from statesmen to scientists, athletes to inventors, entrepreneurs to theologians, and writers to teachers. Reed's heroes include:
Concise and compelling, Real Heroes features a bulleted summary of key facts and takeaways at the end of each profile. This book will become a treasured resource for parents and teachers and a favorite of readers of all ages.

"Real Heroes is a home run from start to finish. Every chapter informs and inspires. A master storyteller, Reed reminds us that heroism is much more than a fleeting impulse or an isolated instance. It springs from personal character, without which a free society is impossible."
--Walter E. Williams, economist, George Mason University

"A comprehensive roll call of the champions of liberty. You've heard of some of these extraordinary men and women, you'll wonder why you haven't heard of others before, but you'll learn something in every chapter."
--Daniel Hannan, member of the European Parliament from Britain, author of Inventing Freedom and The New Road to Serfdom

"If you love a good biography, you'll love Larry Reed's Real Heroes. Instead of a single biography, you get many great stories of liberty's heroes, from Cato the Younger to Adam Smith to Ludwig Erhard. A great book from one of liberty's own heroes."
--Senator Rand Paul

"We learn by stories, and this powerful, well-written book gives us forty superb ones. They couldn't be more timely in an age that is experiencing too much bluster, blather, exhibitionism, and ignorance. Real Heroes will inspire us all to nurture the better angels of our nature."
--Steve Forbes, chairman and editor in chief of Forbes Media

"What a riveting and upbeat book! Real Heroes is hard to put down. I'm still -taking notes on it to supplement my teaching."
--Burton W. Folsom Jr., professor of history, Hillsdale College

"A free and flourishing society requires liberty, and liberty requires vigilance and courage. This book will empower the rising generation to stand up and fight for what is right by giving us examples of brave souls who have done so. It's a treasure trove of heroic stories that encourage and inspire."
--Anne Rathbone Bradley, vice president of economic -initiatives at the -Institute for Faith, Work, and Economics

"No matter their time or place, the men and women we meet in this book share a passion for liberty and justice. Reed presents a road map to strong character and a challenge to build a freer society."
--Jim DeMint, Heritage Foundation president and former U.S. senator

"Reed demystifies the concept of what it means to be a hero and brings readers to the edge of their seats with uniquely compelling tales of triumph. This long-overdue book will change the way we see not only heroes but also -ourselves."
--T. K. Coleman, education director for Praxis

"Integrating the importance of human liberty with moral responsibility and personal character, Reed has penned a compelling outline of the case for freedom through the lens of forty diverse and intriguing portraits."
--Rev. Robert Sirico, president of the Acton Institute

"Cheers to Larry Reed and ISI Books for this fun and fulfilling book of heroes to remember and rediscover."
--Paul Kengor, professor of political science at Grove City College

"Rarely does a book come along at precisely the right time. In an age when the word hero is too often confused with celebrity, Reed gives us a much-needed corrective, told in a lively style so that the stories jump from the pages to inspire us."
--Roger Ream, president of the Fund for American Studies

"In a world in which crassness and hedonism seem to be the norm, it is refreshing to read the tales of noble characters. This is an inspiring book for anyone who aspires to live a life of meaning and purpose. This book will encourage your inner hero to come forth and lead you to your proper role in the world."
--Magatte Wade, award-winning entrepreneur, founder of Tiossan

"Real Heroes is a crucial reminder of the key values needed in greater supply if we're to preserve the freedom and prosperity we've so fortunately been given."
--Peter Goettler, president of the Cato Institute

"I love Larry's emphasis on character. It's the biggest issue of our time for all walks of life, from business to media to politics. Nobody explains its importance through historical examples better than he does."
--Donald G. Smith, investor, New York City

"This book could not come at a better time. It is in the most trying of times that heroes can save us. They teach us about good and evil, give us hope, and inspire us to become our best selves. An enjoyable read, Real Heroes is packed with fascinating stories, inspirational quotes, and takeaway lessons."
--Romina Boccia, Heritage Foundation

"Reed brings to life dozens of stories where high character animates courage and triumph. I cannot recommend it highly enough."
--Kent Lassman, president and CEO of the Competitive Enterprise Institute

"Real Heroes is an exciting and inspiring study of people who dared to challenge the consensus of their time and put their necks on the line for what they believed in. A timely and important book, especially for young people."
--Nathan Bond, cofounder and CEO of Rifle Paper Co.

"Reed's powerful book motivates the reader to go out into the world and stand strong for the ideas of liberty. The stories here are highly educational, fun to read, and inspiring."
--Wolf von Laer, CEO of Students for Liberty

"Real Heroes illustrates the true peacemakers of the world. Reed tells the -stories of individuals who dedicated their lives to the fight for liberty and prosperity. You'll be motivated with every turn of the page."
--Cliff Maloney Jr., executive director of Young Americans for Liberty

Lawrence W. Reed is the president of the Foundation for Economic Education (FEE) and the editor of Excuse Me, Professor: Challenging the Myths of Progressivism. Before joining FEE, he served as president of the Mackinac Center for Public Policy in Midland, Michigan, and chaired Northwood University's department of economics. Reed has written more than a thousand newspaper columns and articles and dozens of articles in magazines and journals worldwide. He is a frequent guest on radio and television.

CIN000406735
Real Heroes: Inspiring True Stories of Courage, Character, and Conviction by Lawrence W. Reed
Lawrence W. Reed
Used - Very Good
Paperback
ISI Books
2016-09-30
272
161017142X
9781610171427
N/A
Book picture is for illustrative purposes only, actual binding, cover or edition may vary.
This is a used book - there is no escaping the fact it has been read by someone else and it will show signs of wear and previous use. Overall we expect it to be in very good condition, but if you are not entirely satisfied please get in touch with us.