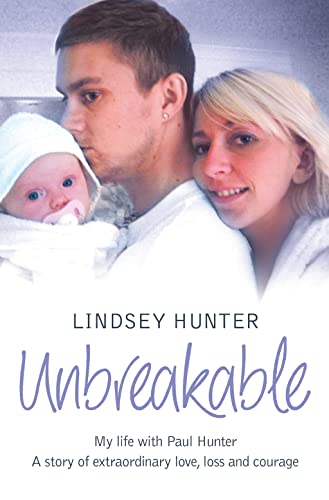 Unbreakable tells Lindsey Hunter's moving and heartbreaking story. Lindsey is the widow of snooker star Paul Hunter, who died tragically aged only 27 in October 2006 after a battle with cancer, leaving Lindsey and their one year-old daughter Evie bereft and alone.

Unbreakable: My life with Paul Hunter. A story of extraordinary love, loss and courage. by Lindsey Hunter

Unbreakable tells Lindsey Hunter's moving and heartbreaking story. Lindsey is the widow of snooker star Paul Hunter, who died tragically aged only 27 in October 2006 after a battle with cancer, leaving Lindsey and their one year-old daughter Evie bereft and alone.

Lindsey met Paul Hunter when she was 21 and he was 18. When they married seven years later, Paul had become a golden boy in the world of snooker, dubbed `the Beckham of the baize,' having won the Masters trophy three times, and attained a world ranking of number four, and Lindsey's happiness looked assured. But tragedy struck when Paul was diagnosed with a rare type of cancer, neuro-endocrine tumours in his abdomen.

Aggressive chemotherapy appeared to work, and within six months Paul was competing in a major championship, with Lindsey cheering him on from the side-lines. More joy came when Lindsey gave birth to their daughter, Evie Rose. But tragically, Paul died in October 2006, 18 months after his diagnosis, leaving Lindsey a widow and single mother.

Lindsey was determined to celebrate Paul's life rather than mourn his death, and has dealt with the loss of her young husband on the beginning of their life together with strength and courage, for the sake of their daughter.

This is not just a heartbreaking and inspirational story about LIndsey and Paul's unbreakable love but a testimony to one of the greatest sportsmen the snooker world has ever seen.

`[Unbreakable] is a story about two people who were very much in love and how they pulled together in a crisis.' The Scotsman

Only the stoniest of hearts could fail to be moved by [Lindsey's] description of the last weeks of [Paul's] life, and the final acknowledgement that the end was near.' Yorkshire Post

Lindsey Hunter married Paul Hunter in summer 2004, and gave birth to their only child, Evie Rose, in December 2005. Paul was diagnosed with neuro-endocrine tumours in April 2005 and passed away in October 2006, leaving Lindsey a widow. In December 2006 Lindsey accepted the BBC Sports Personality of the Year Helen Rollason Award for courage and achievement on her late husband's behalf, granted in recognition of his bravery and determination to continue playing while trying to beat the disease.

GOR001437373
Unbreakable: My life with Paul Hunter. A story of extraordinary love, loss and courage. by Lindsey Hunter
Lindsey Hunter
Used - Very Good
Paperback
HarperCollins Publishers
2008-03-01
352
0007260911
9780007260911
N/A
Book picture is for illustrative purposes only, actual binding, cover or edition may vary.
This is a used book - there is no escaping the fact it has been read by someone else and it will show signs of wear and previous use. Overall we expect it to be in very good condition, but if you are not entirely satisfied please get in touch with us.