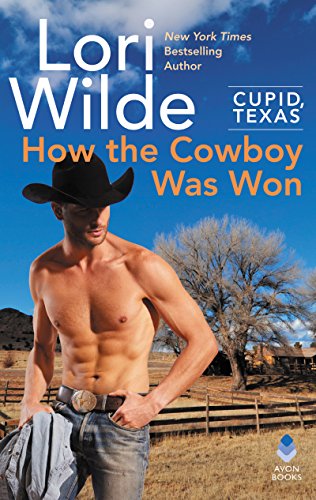 Cupid, Texas: How the Cowboy Was Won
by Lori Wilde

Return to New York Times Bestselling Author Lori Wilde's beloved town of Cupid, Texas, where wedding fever is in the air . and two best friends discover that sometimes the perfect match is standing right in front of you .

Cupid, Texas: How the Cowboy Was Won Summary

Cupid, Texas: How the Cowboy Was Won by Lori Wilde

Return to New York Times Bestselling Author Lori Wilde's beloved town of Cupid, Texas, where wedding fever is in the air . . . and two best friends discover that sometimes the perfect match is standing right in front of you . . .

Ember Alzate is a fantastic matchmaker with one big problem: she can't find the perfect mate for herself! Alzate family legend says that when she kisses "the One" she'll hear a mysterious humming in her head. Well, Ember's kissed a lot of guys and she's never heard a thing. Now, instead of searching for herself, she vows to find her best friend, Ranger Lockhart, a bride. It's clear this smart, sexy man just needs to meet the right gal.

Ranger's returned home to Cupid with marriage on his mind, but he's not interested in the parade of women Ember pushes under his nose. His thoughts keep returning to his best friend-with her combustible combination of curves and sass. No one compares to Ember, but what's it going to take to convince her she's the woman for him?

Cupid, Texas: How the Cowboy Was Won Reviews

"Wilde presents compelling evidence that love can make a person see stars and hear wedding bells with a single kiss." -- Kirkus Reviews
"A cast of varied and richly developed characters fills the pages of this novel, which has plenty of twists and turns along the way to happiness." -- Publishers Weekly
"In addition to being a clever modern spin on Austen's classic, Emma, Wilde's (Cowboy, It's Cold Outside, 2017) latest exudes the same brand of sassy, sexy charm that have made the previous five Cupid, Texas yarns winners with fans of contemporary western romance." -- Booklist
"Wilde's writing is smooth and the story flows so well that it proves why she is one of the best in her genre." -- RT Book Reviews

Lori Wilde is the New York Times, USA Today and Publishers' Weekly bestselling author of 87 works of romantic fiction. She's a three-time Romance Writers' of America RITA finalist and has four times been nominated for Romantic Times Readers' Choice Award. She has won numerous other awards as well. Her books have been translated into 26 languages, with more than four million copies of her books sold worldwide. Her breakout novel, The First Love Cookie Club, has been optioned for a TV movie. Lori is a registered nurse with a BSN from Texas Christian University. She holds a certificate in forensics and is also a certified yoga instructor. A fifth-generation Texan, Lori lives with her husband, Bill, in the Cutting Horse Capital of the World; where they run Epiphany Orchards, a writing/creativity retreat for the care and enrichment of the artistic soul.

GOR009161237
Cupid, Texas: How the Cowboy Was Won by Lori Wilde
Lori Wilde
Used - Very Good
Paperback
HarperCollins Publishers Inc
2018-04-05
384
0062468251
9780062468253
N/A
Book picture is for illustrative purposes only, actual binding, cover or edition may vary.
This is a used book - there is no escaping the fact it has been read by someone else and it will show signs of wear and previous use. Overall we expect it to be in very good condition, but if you are not entirely satisfied please get in touch with us.