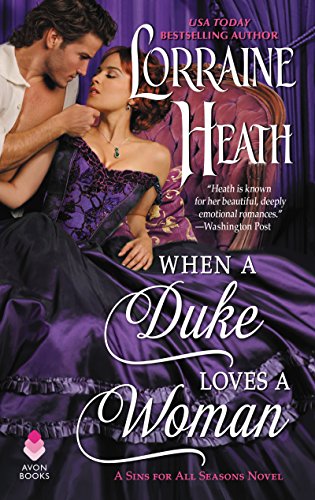 When a Duke Loves a Woman
by Lorraine Heath

Gillie Trewlove knows what a stranger's kindness can mean, having been abandoned on a doorstep as a baby and raised by the woman who found her there. He's a grievously injured, distractingly handsome gentleman who doesn't belong in Whitechapel, much less recuperating in Gillie's bed .

When a Duke Loves a Woman Summary

Gillie Trewlove knows what a stranger's kindness can mean, having been abandoned on a doorstep as a baby and raised by the woman who found her there. So, when suddenly faced with a soul in need at her door-or the alleyway by her tavern-Gillie doesn't hesitate. But he's no infant. He's a grievously injured, distractingly handsome gentleman who doesn't belong in Whitechapel, much less recuperating in Gillie's bed . . .

Being left at the altar is humiliating; being rescued from thugs by a woman-albeit a brave and beautiful one-is the piece de resistance to the Duke of Thornley's extraordinarily bad day. After nursing him back from the brink, Gillie agrees to help him comb London's darker corners for his wayward bride. But every moment together is edged with desire and has Thorne rethinking his choice of wife. Yet Gillie knows the aristocracy would never accept a duchess born in sin. Thorne, however, is determined to prove to her that no obstacle is insurmountable when a duke loves a woman.

When a Duke Loves a Woman Reviews

"Get lost in - because I sure did - this perfectly crafted, superbly told page-turner where passion overrides a duke's duty and an independent commoner's practicality and love is the only thing that can intertwine their two very different worlds into a lifetime of happiness neither of them thought possible." -- Jennifer Ryan, New York Times bestselling author
"In the enjoyable second Sin for All Seasons novel Heath explores Victorian class and wealth disparities... this is a believable and winning romance between two people who don't know how much they need love." -- Publishers Weekly

Lorraine Heath always dreamed of being a writer. After graduating from the University of Texas, she wrote training manuals, press releases, articles, and computer code, but something was always missing. When she read a romance novel, she not only became hooked on the genre, but quickly realized what her writing lacked: rebels, scoundrels, and rogues. She's been writing about them ever since. Her work has been recognized with numerous industry awards, including RWA's prestigious RITA (R). Her novels have appeared on the USA Today and New York Times bestseller lists.

GOR009753285
When a Duke Loves a Woman: A Sins for All Seasons Novel (Sins for All Seasons) by Lorraine Heath
Lorraine Heath
Sins for All Seasons
Used - Very Good
Paperback
HarperCollins Publishers Inc
2018-08-09
384
0062676024
9780062676023
N/A
Book picture is for illustrative purposes only, actual binding, cover or edition may vary.
This is a used book - there is no escaping the fact it has been read by someone else and it will show signs of wear and previous use. Overall we expect it to be in very good condition, but if you are not entirely satisfied please get in touch with us.