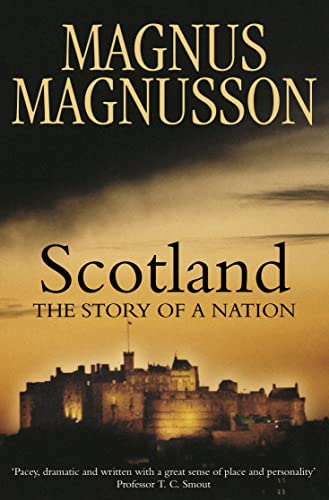 A timely and vivid look at Scotland's long and difficult road to nationhood, re-exploring some cherished myths and unearthing a wealth of fascinating new detail.

Scotland: The Story of a Nation by Magnus Magnusson

A timely and vivid look at Scotland's long and difficult road to nationhood, re-exploring some cherished myths and unearthing a wealth of fascinating new detail.

Magnus Magnusson's starting point is Sir Walter Scott's classic version of Scotland's history, `Tales of a Grandfather' (1827-29), which has moulded the views of generations of Scottish schoolchildren. Like Scott, Magnus Magnusson is a master story teller. In investigating the many questions raised by the nation's turbulent and often poignant past, he gives full weight to the living treasure of local legends and tradition which he believes has as much resonance as academic analysis.

Where did the `Scots' come from? What is the truth about such historical figures as Macbeth, William Wallace and Robert Bruce? What was the significance of the tragic reign of Mary Queen of Scots? What was the impact of Bonnie Prince Charlie and his brutal defeat at Culloden?

Incorporating the findings of many leading modern historians, `Scotland: The Story of a Nation' casts the nation's history in a fascinating new light. It is essential reading for anyone with an interest in Scotland at this pivotal moment in its history.

Magnus Magnusson KBE is an Icelandic national who has spent most of his life in Scotland. After studying English at Oxford, he joined the Scottish Daily Express in 1953, and the Scotsman in 1961 as Assistant Editor. Since 1967 he has been a freelance writer and broadcaster, specialising in history, archaeology and environmental affairs. He has presented many programmes on BBC TV, including Chronicle (1967-80), Mastermind (1972-97), and a twelve-part series on Vikings! (1980). He has published more than twenty books. In 1989 he was awarded an honorary knighthood for his services to the heritage of Scotland. He was chairman of the Ancient Monuments Board for Scotland (1981-89) and of Scottish Natural Heritage (1992-99).

GOR001351479
Scotland: The Story of a Nation by Magnus Magnusson
Magnus Magnusson
Used - Very Good
Paperback
HarperCollins Publishers
2001-11-05
752
0006531911
9780006531913
N/A
Book picture is for illustrative purposes only, actual binding, cover or edition may vary.
This is a used book - there is no escaping the fact it has been read by someone else and it will show signs of wear and previous use. Overall we expect it to be in very good condition, but if you are not entirely satisfied please get in touch with us.