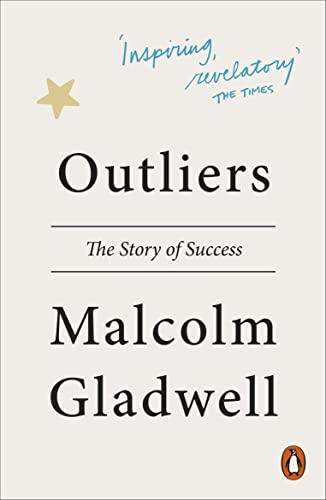 In Stock
$11.39
Why do some people achieve so much more than others? Can they lie so far out of the ordinary? In this book, the author looks at everyone from rock stars to professional athletes, software billionaires to scientific geniuses, to show that the story of success is far more surprising, and far more fascinating, than we could ever have imagined.
Very Good Good
64 in stock

Outliers: The Story of Success by Malcolm Gladwell

Why do some people achieve so much more than others? Can they lie so far out of the ordinary? Malcolm Gladwell looks at everyone from rock stars to scientific geniuses to show that the story of success is far more surprising, and inspiring, than we ever imagined.

'Malcolm Gladwell ... has a genius for making everything he writes seem like an impossible adventure' Tim Adams, Observer

'The best kind of writer - the kind who makes you feel like you're a genius, rather than he's a genius' Dominic Maxwell, The Times

'I wanted to cheer or clap' William Leith, Evening Standard

You will never again think as you did before about [success] ... This book deserves the gold star that adorns its front cover * The Times *
Malcolm Gladwell is a cerebral and jaunty writer, with an unusual gift for making the complex seem simple * Observer *
Makes geniuses look a bit less special, and the rest of us a bit more so * Time *
Gladwell deploys a wealth of fascinating data and information to illustrate his thesis ... Outliers challenges accepted wisdom * FT *

Malcolm Gladwell is the author of five international bestsellers: The Tipping Point, Blink, Outliers, What the Dog Saw, and David and Goliath. He is the host of the podcast Revisionist History and is a staff writer atThe New Yorker. He was named one of the 100 most influential people byTime magazine and one of the Foreign Policy's Top Global Thinkers. Previously, he was a reporter with the Washington Post, where he covered business and science, and then served as the newspaper's New York City bureau chief. He graduated from the University of Toronto, Trinity College, with a degree in history. Gladwell was born in England and grew up in rural Ontario. He lives in New York.

GOR001242998
Outliers: The Story of Success by Malcolm Gladwell
Malcolm Gladwell
Used - Very Good
Paperback
Penguin Books Ltd
2009-06-24
320
0141036257
9780141036250
N/A
Book picture is for illustrative purposes only, actual binding, cover or edition may vary.
This is a used book - there is no escaping the fact it has been read by someone else and it will show signs of wear and previous use. Overall we expect it to be in very good condition, but if you are not entirely satisfied please get in touch with us.