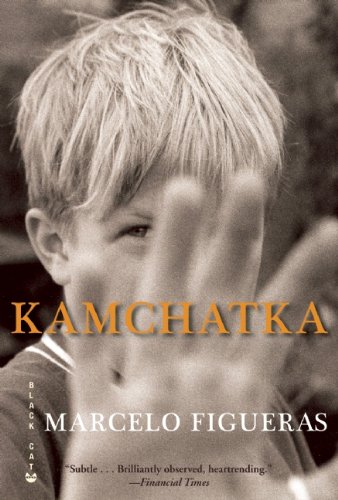 In 1976 Buenos Aires, a ten-year-old boy lives in a world of school lessons and comic books, TV shows and games of Risk--a world in which men have superpowers and boys can conquer the globe on a rectangle of cardboard. But in his hometown, the military has just seized power, and amid a climate of increasing terror and intimidation, people begin to disappear without a trace.

When his mother unexpectedly pulls him and his younger brother from school, she tells him they're going on an impromptu family trip. But he soon realizes that this will be no ordinary holiday: his parents are known supporters of the opposition, and they are going into hiding. Holed up in a safe house in the remote hills outside the city, the family assumes new identities. The boy names himself Harry after his hero Houdini, and as tensions rise and the uncertain world around him descends into chaos, he spends his days of exile learning the secrets of escape.

Kamchatka is the portrait of a child forced to square fantasy with a reality in which family, politics, history, and even time itself have become more improbable than any fiction. Told from the points of view of Harry as a grown man and as a boy, Kamchatka is an unforgettable story of courage and sacrifice, the tricks of time and memory, and the fragile yet resilient fabric of childhood.


"Funny, wistful, and wise . . . [Kamchatka] suggests that our stories do not end, that heroism lies in one's ability to change, and that we all need a place where we can retreat to before we can learn to face the world again." --Tiffany Sun, O Magazine

"[Figueras] vividly evokes a child's reaction to a world beleaguered by violence. . . . [A] hopeful message about the healing powers of imagination and love."--The New York Times

"Haunting . . . Warmhearted . . . [Kamchatka] unfolds with disarming simplicity. . . . Bursting with good humor, with a bittersweet, melancholy shadow, Figueras's superb novel amply illustrates that 'laughing and crying at the same time is something life teaches you without you even noticing.'"--Shelf Awareness

"Kamchatka is not a nostalgic book. Its narration is unconstrained and light, entwining and sympathetic. . . . Read it, and buy yourself a board game of Risk."--Bookslut

"Stark and immediate, more moving because it is presented without sentimentality . . . [Written] with wry comedy . . . the tenderness breaks your heart."--Booklist

"Figueras writes with power and insight about the ways in which a child uses imagination to make sense of terrifying and baffling reality."--The Times (UK)

"Like Carlos Eire's wonderfully buoyant memoir of pre-revolutionary Cuba, Waiting for Snow in Havana, Figueras chooses to capture the drumbeat of history in the small, offbeat details of a boy's life. . . . Tinged with a doomed innocence that comes shining through Figueras's irrepressible telling . . . Kamchatka is a colorful, unforgettable vision of a boy's--and nation's--attempt to make sense of a descent into darkness and chaos. It is also a moving attempt to recapture the memory of the 'disappeared'--a trick of fate that allows loved ones to re-appear by writing about them."--Words Without Borders Magazine

"Kamchatka is a superb novel that refracts public, political events through the sensibilities of everyday life. . . . Balances adult understanding and a child's interests and anxieties. The language mediates between the two. Think not Melville, but the Mark Twain of Huckleberry Finn, yet starring a Huckleberry Finn who has read Melville. . . . Kamchatka came to me by chance. Don't trust to such luck. Seek it out."--J. Kates. The Arts Fuse (blog)

Born in 1962 in Buenos Aires, Marcelo Figueras is an award-winning journalist, screenwriter, and novelist. He has also been a war correspondent and singer. Figueras makes daily contributions to the Spanish-language literary blog El Boomeran: www.elboomeran.com. His books have previously been translated into French, German, Dutch, Polish and Russian; This is his first novel to be published in English.

CIN000277968
Kamchatka by Marcelo Figueras
Marcelo Figueras
Used - Very Good
Paperback
Grove Press / Atlantic Monthly Press
2011-05-19
312
0802170870
9780802170873
N/A
Book picture is for illustrative purposes only, actual binding, cover or edition may vary.
This is a used book - there is no escaping the fact it has been read by someone else and it will show signs of wear and previous use. Overall we expect it to be in very good condition, but if you are not entirely satisfied please get in touch with us.