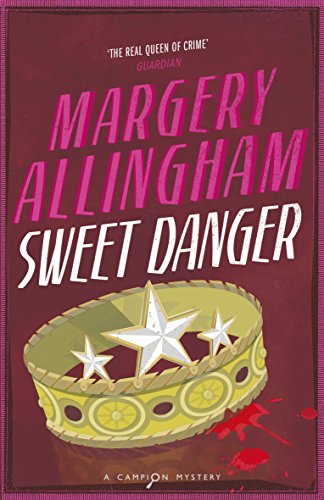 In Stock
$11.69
A VINTAGE MURDER MYSTERYNestled along the Adriatic coastline, the kingdom of Averna has suddenly - and suspiciously - become the hottest property in Europe, and Albert Campion is given the task of recovering the long-missing proofs of ownership.
Very Good Good
5 in stock

A VINTAGE MURDER MYSTERY Nestled along the Adriatic coastline, the kingdom of Averna has suddenly - and suspiciously - become the hottest property in Europe, and Albert Campion is given the task of recovering the long-missing proofs of ownership. His mission takes him from the French Riviera to the sleepy village of Pontisbright, where he meets the flame-haired Amanda Fitton. Her family claim to be the rightful heirs to the principality, and insist on joining Campion's quest. Unfortunately for them, a criminal financier and his heavies are also on the trail - the clock is ticking for Campion and his cohorts to outwit the thugs and solve the mystery of Averna. As urbane as Lord Wimsey...as ingenious as Poirot... Meet one of crime fiction's Great Detectives, Mr Albert Campion.

Margery Allingham was born in London in 1904. She sold her first story at age 8 and published her first novel before turning 20. She married the artist, journalist and editor Philip Youngman Carter in 1927. In 1928 Allingham published her first detective story, The White Cottage Mystery, and the following year, in The Crime at Black Dudley, she introduced the detective who was to become the hallmark of her sophisticated crime novels and murder mysteries - Albert Campion. Famous for her London thrillers, such as Hide My Eyes and The Tiger in the Smoke, Margery Allingham has been compared to Dickens in her evocation of the city's shady underworld. Acclaimed by crime novelists such as P.D. James, Allingham is counted alongside Dorothy L. Sayers, Agatha Christie and Gladys Mitchell as a pre-eminent Golden Age crime writer. Margery Allingham died in 1966.

GOR001233041
Sweet Danger by Margery Allingham
Margery Allingham
Used - Very Good
Paperback
Vintage Publishing
2004-11-04
256
0099474689
9780099474685
N/A
Book picture is for illustrative purposes only, actual binding, cover or edition may vary.
This is a used book - there is no escaping the fact it has been read by someone else and it will show signs of wear and previous use. Overall we expect it to be in very good condition, but if you are not entirely satisfied please get in touch with us.