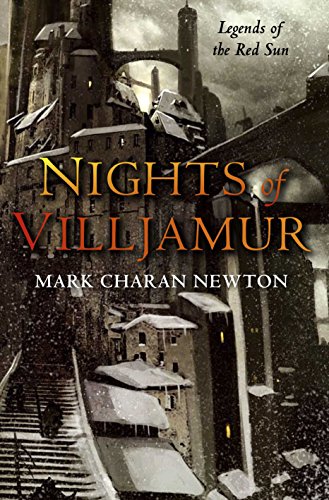 An ice age strikes a chain of islands, and thousands come to seek sanctuary at the gates of Villjamur: a city of ancient spires and bridges, a place where banshees wail the deceased, cultists use forgotten technology for their own gain and where, further out, the dead have been seen walking across the tundra.

When the Emperor commits suicide, his elder daughter, Rika, is brought home to lead the Jamur Empire, but the sinister Chancellor plans to get rid of her and claim the throne for himself.

Meanwhile a senior investigator in the city inquisition must solve the high-profile and savage murder of a city politician, whilst battling evils within his own life, and a handsome and serial womanizer manipulates his way into the imperial residence with a hidden agenda.

When reports are received that tens of thousands of citizens are dying in a bizarre genocide on the northern islands of the Empire, members of the elite Night Guard are sent to investigate. It seems that, in this land under a red sun, the long winter is bringing more than just snow . . .

Mark Charan Newton was born in 1981, and holds a degree in Environmental Science. After working in bookselling, he moved into publishing, working on film and media tie-in fiction, and later, writing science fiction and fantasy including the Legends of the Red Sun and Drakenfeld series. He currently lives and works in Derbyshire.

GOR001231121
Nights of Villjamur by Mark Charan Newton
Mark Charan Newton
Legends of the Red Sun
Used - Very Good
Hardback
Pan Macmillan
2009-06-05
464
0230712584
9780230712584
N/A
Book picture is for illustrative purposes only, actual binding, cover or edition may vary.
This is a used book - there is no escaping the fact it has been read by someone else and it will show signs of wear and previous use. Overall we expect it to be in very good condition, but if you are not entirely satisfied please get in touch with us.