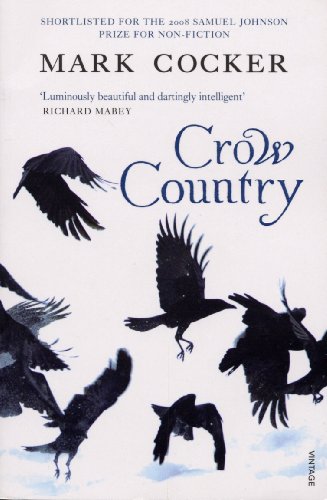 One night Mark Cocker followed the roiling, deafening flock of rooks and jackdaws which regularly passed over his Norfolk home on their way to roost in the Yare valley.

One night Mark Cocker followed the roiling, deafening flock of rooks and jackdaws which regularly passed over his Norfolk home on their way to roost in the Yare valley. From the moment he watched the multitudes blossom as a mysterious dark flower above the night woods, these gloriously commonplace birds were unsheathed entirely from their ordinariness. They became for Cocker a fixation and a way of life.
Cocker goes in search of them, journeying from the cavernous, deadened heartland of South England to the hills of Dumfriesshire, experiencing spectacular failures alongside magical successes and epiphanies. Step by step he uncovers the complexities of the birds' inner lives, the unforeseen richness hidden in the raucous crow song he calls 'our landscape made audible'.
Crow Country is a prose poem in a long tradition of English pastoral writing. It is also a reminder that 'Crow Country' is not 'ours': it is a landscape which we cohabit with thousands of other species, and these richly complex fellowships cannot be valued too highly.

Luminously beautiful and dartingly intelligent, Cocker's obsessive quest after the ancient trails of rooks across our dusk skies leads to an almost sacred space: a place where the landscape of the imagination and the lovingly, minutely observed realities of the natural world come to roost together -- Richard Mabey
Guaranteed to ensure that you never look at a crow in quite the same way again * Guardian *
Fabulous... Like all classic works of natural history, is is an extraordinary revelation of riches and wonders and that lie at our doorsteps, completely ignored * Independent *
A splendid book...Crow Country's narrative of rookish discovery unfolds with splendid variety, incorporating scientific exposition, biography, environmental history, poetry, memoir and biography... Your heart beats faster as he describes a pack of tight-packed wigeon flushing in fear from an icy creak. You feel the shock of recognition as a barn owl meets his gaze. It's infectiously emotional. At it's most lyrical Crow Country matches the heights of that deeply eerie work of avian obsession JA Baker's The Peregrine; yet at its most scientific, it could sit alongside the best ornithological monographs... Crow Country is a significant, beautiful work * New Statesman *
Exquisitely written, passionate exploration of the local and commonplace * BBC Wildlife *

Mark Cocker is an author, naturalist and environmental activist whose eleven books include works of biography, history, literary criticism and memoir. His book Crow Country was shortlisted for the Samuel Johnson Prize in 2008 and won the New Angle Prize for Literature in 2009. With the photographer David Tipling he published Birds and People in 2013, a massive survey described by the Times Literary Supplement as 'a major literary event as well as an ornithological one'. Our Place: Can We Save Britain's Wildlife Before It Is Too Late?, was described by the Sunday Times as 'impassioned, expert and always beautifully written... a sobering and magnificent work'. His most recent book, A Claxton Diary, won the East Anglia Book Award in 2019.

GOR001223264
Crow Country by Mark Cocker
Mark Cocker
Used - Very Good
Paperback
Vintage Publishing
2008-08-07
224
0099485087
9780099485087
Winner of New Angle Prize for Literature 2009 Short-listed for Samuel Johnson Prize for Non-Fiction 2008
Book picture is for illustrative purposes only, actual binding, cover or edition may vary.
This is a used book - there is no escaping the fact it has been read by someone else and it will show signs of wear and previous use. Overall we expect it to be in very good condition, but if you are not entirely satisfied please get in touch with us.