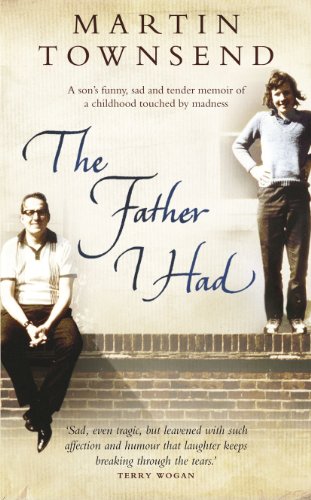 The Father I Had
by Martin Townsend

Used Price
$14.69
Free Shipping in the US
But what happens when your dad is a manic-depressive who paints the front door in the middle of the night and sends good-wishes to Michael Crawford scrawled on a pair of underpants?

Martin Townsend grew up with a father, Ron, who had suffered recurring mental illness since the early 1950s.
Reviews:
Trustpilot
Very Good

The Father I Had Summary

The Father I Had by Martin Townsend

Father and son: arguably the most complex of all family relationships. But what happens when your dad is a manic-depressive who paints the front door in the middle of the night and sends good-wishes to Michael Crawford scrawled on a pair of underpants?

Martin Townsend grew up with a father, Ron, who had suffered recurring mental illness since the early 1950s. At the slightest emotional trigger he could turn from a loving and compassionate dad to a restless, dead-eyed depressive or a spiteful, bullying monster.

In The Father I Had, Martin Townsend, editor of the Sunday Express, paints a powerful, often painful portrait of life with his dad. From the soaring, often hilarious 'highs' to the horrific 'lows' of his father's three suicide attempts, he tells a story of pain, courage and resilience and produces a moving and account of a close family nearly torn apart by mental illness.

Customer Reviews - The Father I Had

The Father I Had Reviews

I laughed and cried at Martin Townsend's touching account of a son's embarrassment, fear, pleasure and love in his relationship with his father ... A powerful indictment of a society that still fails people who have a mental illness. * Jenni Murray, Presenter, Woman's Hour *
Sad, even tragic, but leavened with such affection and humour that laughter keeps breaking through the tears. A lovely hymn to family love. * Terry Wogan *
A compelling read that makes you laugh as well as ache ... a vivid snapshot of life in suburban Britain in the early '60's. * Woman & Home *
An acutely written and deeply felt portrait. * Daily Express *
Down to earth and amusing ... reveals the compassion and strength of a child growing up in the shadows of mental illness. This book should bring comfort and encouragement to the hundreds of families who contact SANE still feeling excluded and alone. * Marjorie Wallace, Chief Executive SANE *

Martin Townsend has been a journalist since 1979. He worked at Today newspaper and, at twenty-five, became the youngest regular columnist in national newspapers. He worked at You magazine at the Mail on Sunday as showbusiness editor before joining the staff of celebrity weekly OK!, where he became editor in 1998. He has been editor of the Sunday Express since 2001 and is author of a highly popular weekly column, A Word from the Editor. Married with three children, Martin Townsend lives in West London. The Father I Had is his first book.

GOR010808783
The Father I Had by Martin Townsend
Martin Townsend
Used - Very Good
Paperback
Transworld Publishers Ltd
2017-10-23
448
0552174661
9780552174664
N/A
Book picture is for illustrative purposes only, actual binding, cover or edition may vary.
This is a used book - there is no escaping the fact it has been read by someone else and it will show signs of wear and previous use. Overall we expect it to be in very good condition, but if you are not entirely satisfied please get in touch with us.