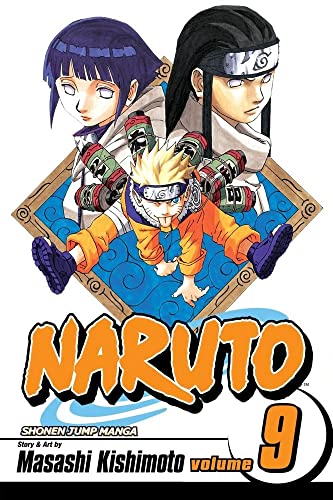 Used Price
$10.39
Free Shipping in the US
Volume 9 in the bestselling Narutoseries.
Reviews:
Trustpilot
Like New Very Good

Naruto is a ninja-in-training with a need for attention, a knack for mischief, and sealed within him, a strange, formidable power. His antics amuse his instructor Kakashi and irritate his teammates, intense Sasuke and witty Sakura, but Naruto is serious about becoming the greatest ninja in the village of Konohagakure!

Still in the thick of the Journeyman Ninja Selection Exams, the student ninja unleash their signature techniques as they spar in a series of one-on-one elimination matches. The heated battles bring out a new side in many of the opponents as they fight to advance to the third stage of the test and, in some cases, struggle to survive! Naruto looses an explosive new move on his foe...but will it be enough to win? And when Hyuga clan members Neji and Hinata are pitted against one another, will old family grudges make their duel even more vicious than the others?

Masashi Kishimoto made his debut in Weekly Shonen Jump in 1999 with Naruto, Naruto became a big hit with both boys and girls. Kishimoto added a modern flavor to the ancient world of Japanese ninja to make it a popular novel. It will become an anime series airing on Japanese networks this fall. To date, with the release of all 13 volumes of the graphic novel, this title has sold 12 million copies. Kishimoto has received the Hop Step Award.