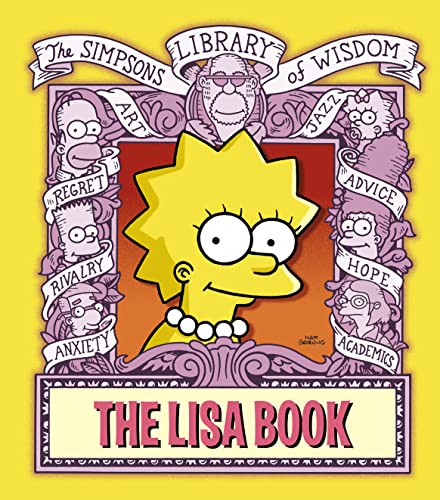 The Lisa Book
by Matt Groening

The Lisa Book (The Simpsons Library of Wisdom) by Matt Groening

Whether she's extolling the virtues of vegetarianism and the global village, raising awareness about the world's moral and social ills, or simply playing with her Malibu Stacy doll and dreaming of ponies, Lisa Simpson is a role model for the 21st century! Discover Lisa's lifelong ambitions, gather snappy answers to environmentally insensitive questions, uncover "the Truth" by logging onto her Internet blog, and follow along as she solves a real mystery. From the benefits of being Teacher's Pet to the secret correspondences of Commander-in-chief Lisa's presidential administration you will explore the inner workings of one of America's most progressive eight-year-old minds.

The Simpsons Library of Wisdom

Matt Groening, the creator of "The Simpsons," offers an on-going series of portable and quotable books that will eliminate the need for all religions and philosophies, exalt man's role in the universe, and make the world a better place...sort of. No other television show in history has commented so freely and so humorously on modern times, and there seems to be no end in sight for the sharp satire and pointed parody that "The Simpsons" serves up every night of the week all around the world.

Add the newest entries in the series, "Krusty" and "Lisa", to your library and become a sophisticated, well-read person of distinction, join the literati, and become a scholar of Simpsonology

Matt Groening is the creator of Life in Hell, The Simpsons and Futurama, all published by HarperCollins.

GOR001247248
The Lisa Book (The Simpsons Library of Wisdom) by Matt Groening
Matt Groening
The Simpsons Library of Wisdom
Used - Very Good
Hardback
HarperCollins Publishers
2006-09-18
96
0007234570
9780007234578
N/A
Book picture is for illustrative purposes only, actual binding, cover or edition may vary.
This is a used book - there is no escaping the fact it has been read by someone else and it will show signs of wear and previous use. Overall we expect it to be in very good condition, but if you are not entirely satisfied please get in touch with us.